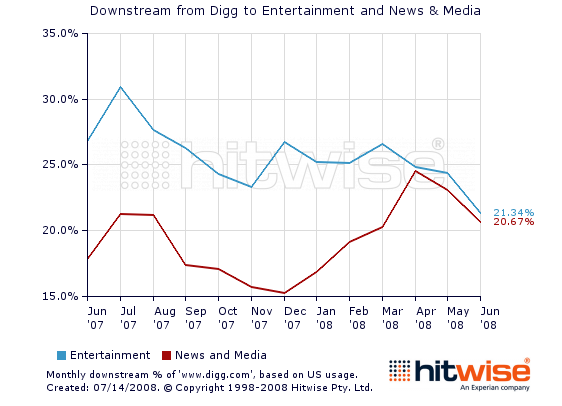 As Digg becomes more mainstream, so are the headlines linked to on its homepage. The once tech-heavy site long ago expanded into other categories such as entertainment, world, and business news. But that change is finally hitting its home page, either because Digg is attracting more mainstream users who are Digging more mainstream stories or it is using other (algorithmic) methods to point its firehouse in the direction of mainstream media. (Comscore shows 15.4 million unique visitors in May, and 6.3 million U.S. visitors in June).

This data confirms a trend that Allen Stern at CenterNetworks noticed last week. Namely, that UK newspapers in particular, like the Guardian, are showing up a lot more often on Digg’s homepage, displacing more familiar tech sites such as Ars Technica, Engadet, and Gizmodo. (When I checked today, about half of the stories on Digg’s homepage linked to traditional news sites). He also speculated whether this meant that Digg is trying to sell itself to the Guardian, which bought the blog network that owns PaidContent last week for an estimated $30 million.

That seems like a stretch, but showing that it can drive more traffic to traditional media sites would certainly make Digg more appealing to any potential acquirer. There has been no shortage of acquisition rumors over the years, but it would make more sense for a semi-neutral technology company like Microsoft or Google to make a bid than a media company with ts own properties to promote.