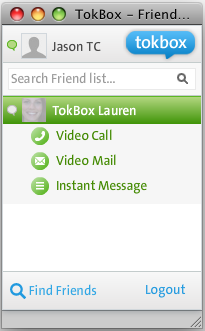 TokBox, the impressive video chat startup that doesn’t require any kind of extra software, has launched a new AIR app that will bring the web service’s easy setup to the desktop. Thanks to Adobe’s AIR platform, the software will be cross-compatible and available for Windows, Mac, and Linux users.

The client offers a very simple interface that should be familiar to anyone who has ever used Skype. Users can access all of TokBox’s standard features, which include Video Calls, Instant Messages, and Video Mail. Beyond the easy interface, the client also improves on the TokBox experience by giving users instant notification whenever a contact initiates a chat with them, and also allows them to set their availability status so that others know when they can be contacted. The app also generates a standard TokBox link, so that users can invite their friends to the chat even if they don’t have the client.

The new client should appeal to frequent users of the site, but it seems a little counterintuitive – TokBox is special because you don’t need to use a client, as you do with competitors like Skype or chat networks like AIM and MSN. The release of a desktop client pits TokBox even more directly against these massive networks, and makes it clear that the company isn’t satisfied with just solving a problem (easy browser-based video chat) – they’re looking to take on the big guns.

The new client’s no-hassle setup and universal compatibility make it a strong addition to TokBox’s quickly expanding offerings, which include a recently launched Firefox extension that integrates with Facebook Chat, and integration with Meebo.