The GOP wants you to help it figure out its party platform. Today, the Republican Platform Committee launched a site to gather comments and policy suggestions directly from the party faithful (and anyone else willing to give up their e-mail address). They also launched a corresponding Facebook app. The idea ostensibly is to gather feedback and debate about policy issues such as national security, energy and gas prices, health care reform, judicial nominations, and that old crowd pleaser “Protecting American Values.” Where’s the technology plank? Here are a few resources for them to start thinking about what tech policies we need.

For each issue, there is a synopsis of some of the questions policy makers are grappling with, and registered members are able to respond via either text or video comments. The site will have polls and will be moderated to keep the flame wars down. There is no apparent way to create new topics of debate or suggest detailed policy proposals other than in comments. It kind of screams for a wiki approach to some of this. But that would mean giving up control of the policy discussions on the site. Imagine that.

The site itself has a stodgy charm to it. But at least the GOP is creating an online forum for citizens to engage with policy makers before they make policy. This could just be an empty effort whose real purposes is to collect e-mail addresses from party members to hit them up for donations. And if that’s the case, the site will soon die. But if the GOP can create an active community of people truly interested and informed about different policy options, and feed that into their platform, it could give them a real competitive advantage over the Democrats.

In fact, why aren’t the Democrats doing this as well? They may have something similar, but a quick search this morning didn’t turn up anything other than this Listening to America town hall tour of 50 states. If you want to listen to America, you can listen to a lot more people online than in 50 town halls.

It is important to about extend participation online beyond fund-raising, and soliciting direct policy proposals from voters is a step in the right direction.

Of course, this may go nowhere. But as with any online community, the content that it produces is so often defined by the early, most involved members of that community. In politics that is often members with the most extreme views. For this to work, the GOP needs to get the balance right in terms of who it encourages to participate early on. If serious policy wonks gravitate to the site, and communicate effectively to other members, it could turn out to be a great place to test the waters for new policy initiatives. Or even to generate new ones the GOP never considered.

The Democrats should do the same. They could launch a site like this in a couple weeks. 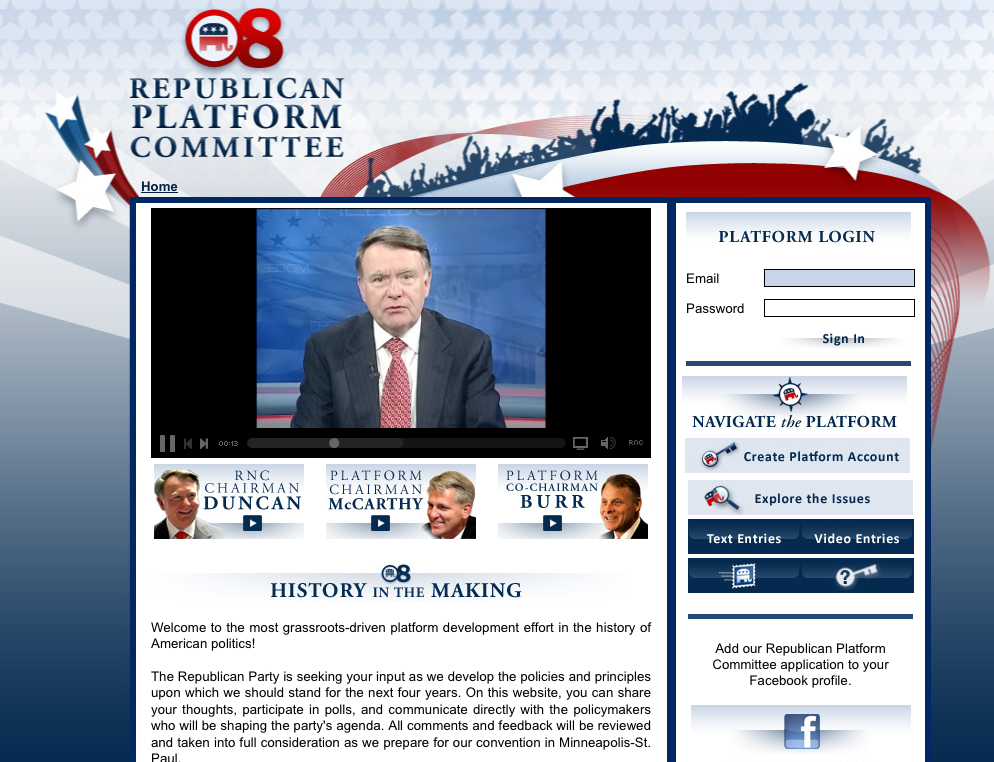