It has been confirmed that all Nvidia G84 and G86 chips are defective. Analysts first believed that it was only the batch that HP received that that were bad, but other sources say that the G84 and G86 use the same ASIC across the board, meaning there will be a lot more defective GPU’s than originally expected.

Part of the drama has also come from Nvidia’s unwillingness to admit that the problem is much larger than they initially expected. According to Charlie Demerjian from The Inquirer, Nvidia has been feeding personalized stories to each analyst, trying to disguise the magnitude of the situation. After recently announcing a decrease in projected second quarter revenues, which were initially in the $1.08 billion to $1.11 billion range and were lowered to the $875 million to $950 million range, their stock has taken a beating, losing over a third of its value. Additionally Nvidia will reportedly incur a loss of between $150 million-$200 million on the defective units. Other sources believe that the losses will be much greater, which would hurt the company’s already bruised stock.

This could be just the beginning of a very rough stretch for Nvidia. The G84 and G86 chipsets are used in a large variety of laptops including industry leaders such as HP, Dell, and Apple. Keep a close eye on Nvidia’s stock; if they don’t think of a solution quickly, it could very well suck up all the company’s cash for the quarter. 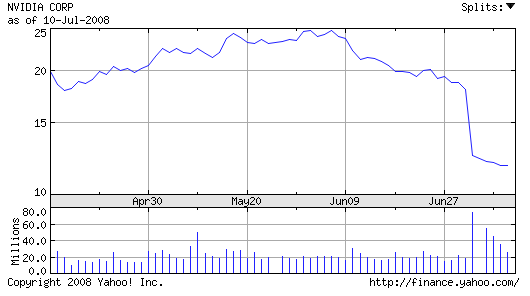