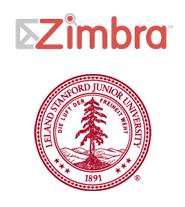 Webmail in the educational market appears to be a three horse race between Zimbra, Gmail and Outlook/Microsoft Exchange. And today, Yahoo’s Zimbra won out against the other two in a bid to provide for Stanford University.

This is the latest in a series of victories for Zimbra, which includes Georgia Tech, University of Wisconsin, Texas A&M, Cal Poly, and University of Pennsylvania. Zimbra powers the email systems for over 300 universities worldwide. That comes in around an impressive 1.5 million email addresses ending in “.edu”.

We hear the contest to sign Stanford was particularly heated, and in the end, Google had less luck than when it won the chance to conduct the biggest deployment of Gmail to date across Australian schools.

Zimbra may have won out at Stanford for its particularly strong mobile support (with ActiveSync), as well as its synchronization and administrative functionality. It also boasts certain enterprise-friendly features that Gmail has yet to offer.

More information about this roll out can be found on Stanford Report.