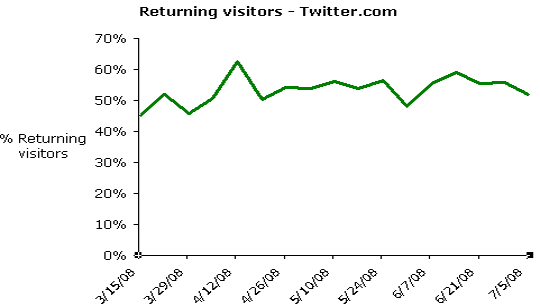 Michael once wrote that Twitter may not have to worry about uptime any more, explaining, “I now need Twitter more than Twitter needs me.” And, a few months and countless hours of downtime later, it looks like most of you feel the same way. The early adopters may have migrated to Friendfeed, but the masses appear to be content to stay and take their punishment at Twitter.

Hitwise has just released their latest Twitter usage data, and despite a reliability record that many would describe as an “epic fail”, the service is showing a surprising amount of resilience. Twitter’s share of returning visitors (users that return to the site more than once in thirty days) has held steady at around 55% since March. Twitter has seen near-constant downtime and disappearing features in that time, but nobody seems to mind. At least, not enough to try out one of the other microblogging services.

The site has also seen impressive growth, rising from around .0004% of all internet traffic in January to .0024% in July – the nearest competitor only sees about 1/10th of that traffic. These numbers also neglect to account for the many Twitter users who use the site through its API using 3rd party programs, so we can expect Twitter’s lead to be even more significant.

In effect, we’ve been telling Twitter that no matter how badly it screws up, we’ll stay loyal, simply because our friends are already on the service. 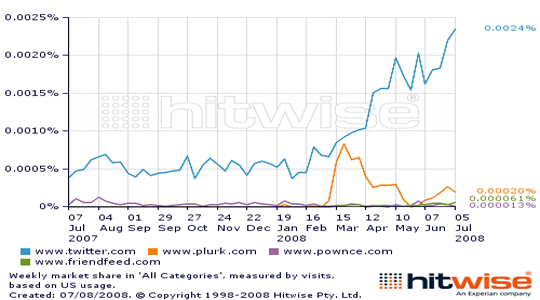