My Yahoo, the leading customized homepage provider, has finally rolled out its redesigned interface to all of its users. Yahoo has allowed users to upgrade to the new interface for over a year, but has taken its time in rolling it out to everyone.

New features in this release include:

The interface has been in need of a facelift for some time, as Yahoo has watched its userbase dwindle from 56.9 million users last November to 41.6 million in June. Comparatively, iGoogle has has seen increase from 23.8 users in November to 24.3 million unique visitors in May. Google performance isn’t exactly stellar, either (maybe iGoogle could use a refresh too), but at least it hasn’t been losing users. So where did My Yahoo’s 15 million lost users disappear to? We’re guessing Facebook, which has gone from 92.7 million visitors to 123.9 million in the same time period.

Also notable is Yahoo’s announcement that they intend to allow external developers to create their own applications and modules for use on My Yahoo, along with other parts of the Yahoo network. 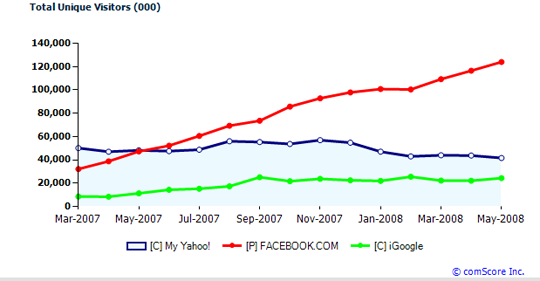