Instant messaging, a technology that actually predates the Internet, hasn’t seen too many changes over the years. The AOL Instant Messenger of today is not that different from the AOL Instant Messenger from 1997. There has been some new technology with the integration of instant messaging, VoIP, and webcam capabilities with services such as Skype, but two things have remained the same. Voice chat has been real-time, and text chat has been near-real-time.

Say2GO, a new near-real-time voice messaging system, is attempting to change this. The new technology, they refer to as “voicing” is closer to voicemail than IM. The product, currently in limited beta, provides users the ability to send and receive voice messages that are transcribed using voice recognition and sent as both audio and text. The desktop client uses the Microsoft Speech API for the voice recognition element, so it is only available on Windows and XP users are required to download and install the client libraries from Microsoft. Without the voice recognition library, the client reverts to being a standard IM client with a neat clean interface such as the contact list being displayed in cover-flow style. 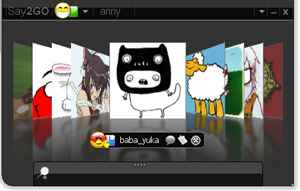 The idea and technology is still fairly new, and it shows. After spending 10 minutes to train both of our speech recognition libraries, Nik and I tested Say2GO and we saw very poor results. Nik said “Another test of the speech recognition software,” and it translated into “man another said the phone is the victim mission the way you read into.” I saw fairly better results but they were still off. I had said “Why did I spend ten minutes training this software,” and it translated into “why didn’t spend ten minutes training in software for.” Nik has a thick Australian accent and an absurdly loud fan on his computer, so that may have affected the transcription.

MSN Messenger has a similar capability called MS Voice Clips, that they added in 2005, which enables users to send 15 second or less voice notes to friends through MSN Messenger. Unlike Voice Clips, Say2GO enables you to playback your recording, cancel, or schedule it to be sent later.

Microsoft seems especially interested in this technology seeing as how Say2GO recently won the First Prize in ISV/Software Solutions in Microsoft’s 2008 Partner Contest, out of 47,000 member companies. They are heavily promoting the new speech recognition libraries, as once you train your profile in one application it can also be used in other apps that use the same library.

With voice recognition where it is at at the moment the feature on its own probably will not be a strong incentive for users to switch to a whole new IM client – but Say2Go intend to support existing IM networks rather than building out their own. Voice recognition is only the first part of planned ‘added’ services that can be used on top of these networks. Currently Say2Go supports the ICQ network, with support for other networks expected in the near future.

Will we ever bury voice recognition? Read more at Techcrunch IT >> 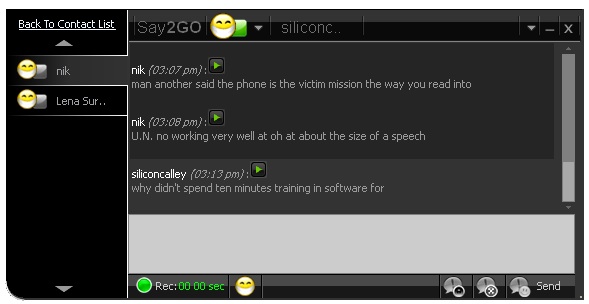