Many of the startups we come across are “beta” in name only – they’re feature complete, with thousands of users and only a few (if any) bugs. Combo, a new startup that is looking to offer users a central hub for communication across their social networks, isn’t any of these things.

Combo is a beta in the truest sense, and frankly, it needs work. Services update at random intervals, many of the links don’t seem to be working properly, and the interface itself is badly in need of a redesign. But the site is still in private beta, so it’s too soon to count it out. If you’d like to try it out for yourself, you can grab one of 500 invites here.

Combo’s current shortcomings are frustrating, because the site seems to have a lot of potential. Combo monitors and pulls recent activity from a plethora of services that include Facebook, MySpace, Flickr, Digg, and over thirty others. Your activities are all aggregated as part of a “ComboStream”, while the “Watchbox” lets you monitor the activities of your friends. 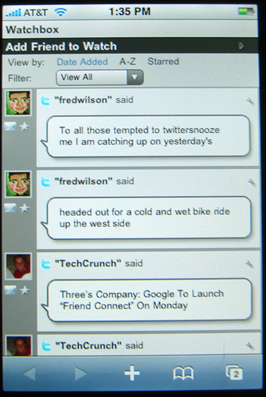 The site also offers a strong mobile version that features all of the same functionality as the main site. For now the site supports the iPhone, with planned support for more mobile platforms in the near future. Using the site on my iPhone was painless, and I was able to send out a mass status-update to Facebook and Twitter without much trouble. At least, the site said it was updating these services – no update was ever sent.

Co-founder Aaron Raskin says that Combo isn’t just about activity streaming – instead, the focus is on becoming a communication and publishing tool. Key to this idea is the site’s universal address book, which compiles contacts from all of your social networks (and even your phone), allowing you to share content without needing to manually login to each social network.

Combo has a good idea, but its execution is flawed. Unless it can reinvent itself with a more intuitive interface, few people will turn to it instead of the social networks they’ve become accustomed to. The site will also see stiff competition from FriendFeed, which released an iPhone version earlier this week.