Who is winning the race to become the top site for live Web video? A quick check on Google Trends for Websites and comScore suggests that over the past four months Justin.tv is pulling ahead of the pack. According to Google Trends, Justin.tv is attracting more than 300,000 unique visitors a day, compared to only about 60,000 for both Stickam.com and Ustream.tv. Comscore measures visitors on a monthly basis, but shows a similar relative breakdown, with Justin.tv pulling in 1.9 million monthly uniques worldwide versus 860,000 for Stickam, 790,000 for Ustream.tv, and 440,000 for Mogulus. (See chart below).

Both of these measure only the traffic to the main Websites of each competing live Web video service, and do not include how many people watch the videos in embeddable players elsewhere on the Web. But they are apples-to-apples and should give a good indication of the overall trend.

Ustream.tv, at least, realizes it needs to change something in order to catch up. Today it launched a redesign of its site, which gives DIY broadcasters the ability to add text and graphic overlays to their videos and better metrics on how many people are watching their videos. Also, viewers can now subscribe to specific broadcasters. The company claims 10 million unique viewers overall for the month of June, including videos watched offsite. It has 410,000 registered users. 100,000 of them are active and are broadcasting 10,000 to 15,000 live events a day Some of its better known users include Johnny Knoxville, Dane Cook, James Blunt, The Plain White Ts, and both Presidential campaigns. Steve Gillmor, the editor of TechCrunchIT, uses it as well for his NewsGang Live show.

But that right there might just be the problem. Would you rather watch Steve Gillmor talking with his wife about Twitter on a split screen while her cat climbs the couch in the background (this is actually on right now), or French cowgirls in bikinis on Justin.tv? No offense, Steve, but the featured live streams on Justin.tv just seem younger and more fun than the stuff on Ustream.tv. 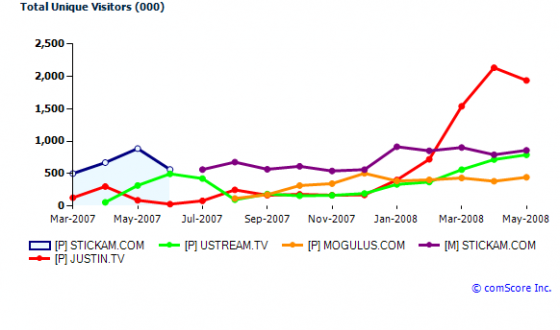 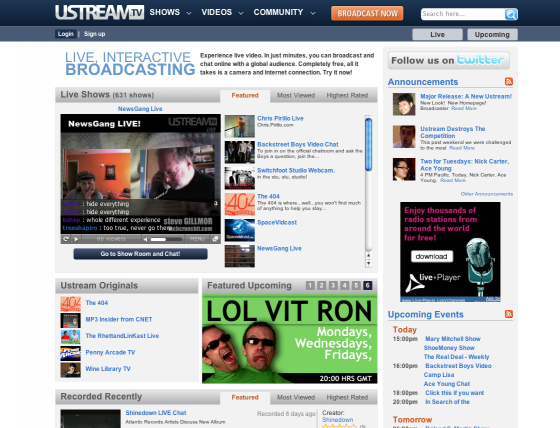 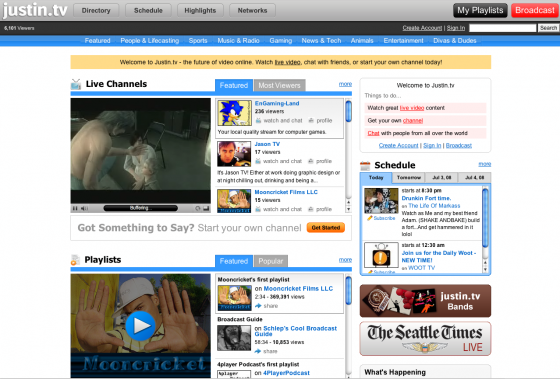