Amazon’s customer reviews are an indispensable feature on the online mega-store, allowing shoppers to get a quick read on products without having to turn to magazine reviews or external sites like epinions. But many products, particularly electronics, have hundreds of reviews. Who has time to read through them all? 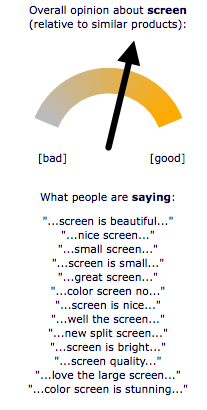 Pluribo, a new startup out of New York, has just released a Firefox extension that looks to filter through the noise of Amazon customer reviews. The plugin automatically culls through every review on a given product and generates a concise two sentence summary that highlights the most common positive and negative comments. For the time being automatic product reviews are restricted to electronics, but the site plans to implement support for other products, like books and kitchen appliances, in the near future.

Beyond providing a condensed summary, Pluribo also tries to justify its conclusions. To see the plugin’s explanation, users need only mouse-over one of the underlined terms, which will generate a list of excerpts from the relevant reviews. For example, hovering over “This product scratches easily” will show a list of quotes that contain phrases related to scratches, scuffs, and other similar terms.

So does it work? Sort of, but I wouldn’t go by Pluribo’s word alone. The system seemed to work well enough for ruling out obviously bad choices, but when it comes down to making a final selection, it’s best to turn to the reviews themselves. Pluribo doesn’t always seem to catch the most obvious problems, and the quotes it uses to justify its conclusions don’t always make sense. There’s also no way to tell which products Pluribo has indexed without opening each individual product page.

It’s also unlikely that many people will be willing to install a Firefox extension to get reviews from Amazon alone(the company says more stores are on the roadmap). Even with its problems, Pluribo is a handy tool and one that could gain some traction once it expands its supported product base.