Whoisi is a central site that allows users to add people and their associated web feeds, and then track any number of these people and their feed items using a follower model. Whoisi is a side project by open source evangelist and Mozilla contributor Chris Blizzard. Currently it supports feeds from Flickr, Twitter, LinkedIn, Picasa and any Atom or RSS feed. Once you have added a number of people that you follow, it presents their feed activity in a time-based interface similar to FriendFeed and MugShot, making it easy to track a large number of feeds.

In Whoisi, any visitor to the site can define a person or an identity, and add the feeds associated with that person for other users to find and follow. To prevent vandalism, there is a revision history so that changes can be reversed. The database already has a large number of names within it – and when you search for a friend or feed you’d like to follow, if they are not already on the site, you can add or edit their feeds easily. Users do not need to signup for an account with Whoisi, as user data (such as followers) is all session-based using a browser cookie, which means you can’t move your follower list between browsers.

You can edit and customize any persons profile with “aliases” to provide alternate names or groups. What this means is the TechCrunch feed can be tagged “Michael Arrington” or “Mike Arrington.” You can also have a TechCrunch group, so Nik Cubrilovic’s feed could be tagged “techcrunch:nik.” The grouping feature is very simple and it could be developed further by users and used for other purposes.

Whoisi is a very clean site, as there is little on the site except for data. An open API is provided that publishes RSS feeds for each defined user, so that the data can be integrated into other applications. 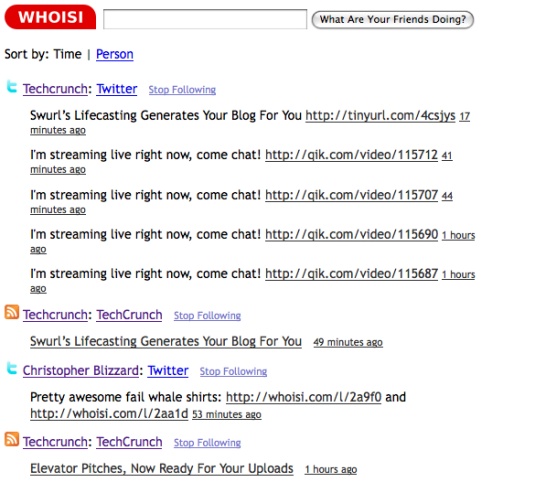