In late July, Japanese Star Wars geeks will be able to lay their hands on USB hubs shaped like R2-D2 and a Darth Vader bust. Both hubs stand about 15cm tall.

Both the R2-D2 and the Darth Vader bust come with 4 USB ports (USB 2.0) and feature lighting and sound effects. When the user pushes the action button, R2D2 says “Pi-pi-pi” and rotate his head. Darth Vader starts to breathe heavily and shake his head. 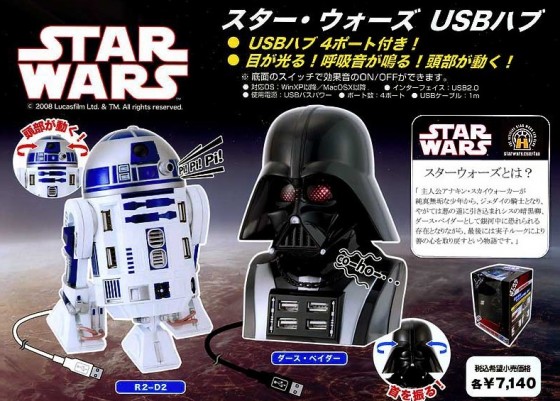 The USB hubs will be offered by Tokyo-based accessory maker Cube Works [JP] for $67 each. The company doesn’t officially talk about an international release but a lot of their products found their way outside Japan in the past, i.e. the humping USB dog.