Polls are popular on the Web because they are interactive without requiring too much effort. They are also a good way to collect a lot of data from users across the Web. SodaHead, a startup founded by former MySpace executives Jason Feffer and Michael Glazer, announced an $8.4 million series B investment today. The round was led by Mission Ventures and Mohr Davidow. (The company previously raised $4.25 million from Mohr Davidow, Ron Conway, and Tech Coast Angels in January, 2007).

Since the site launched last September, it has attracted 600,000 registered members who have submitted three million answers. SodaHead competes with PollDaddy, SurveyMonkey, and Vizu, although it is targeted more at the MySpace crowd. And you can add songs, videos,and images to the polls. Think Yahoo Answers meets PollDaddy. The company says it is really going after Yahoo Answers. Says Glazer;

We are a community site, around any topic people are taking about. With Yahoo Answers, what they missed is the community aspect.

Although any question a user makes can be spread virally as a widget, 90 percent of SodaHead’s traffic still goes through its site. Traffic has been ramping up nicely to 1.2 million U.S. visitors a month, according to comScore (Yahoo Answers, which seems to be doing fine just the way it is, has 33.6 million and growing).

The site is only running Google AdSense ads right now, but since SodaHead is building up a database of the preferences of members based on what kinds of questions they answer in different categories, and even their specific answers, Glazer is confident SodaHead will be able to do better ad targeting overtime. Another revenue source is helping brands engage with consumers through their own polls. 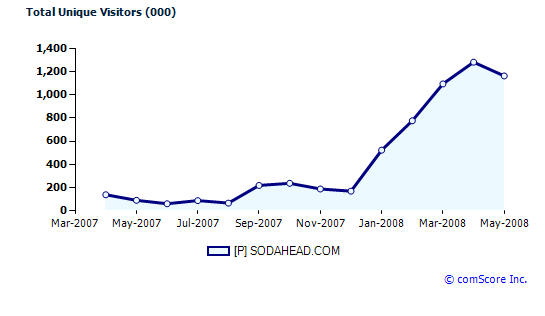