A decade ago, the leading Internet companies were AOL, Amazon, eBay, and Yahoo. With the exception of Amazon, which is experiencing a renewal as it embraces digital distribution and cloud computing, they all fell by the wayside because they failed to adapt to a major market transition. For AOL, it was the transition to broadband. For eBay, it was the rise of search as the primary way to find goods to buy online. And even Amazon had its dark days.

The question for Google, the current Internet market leader, is whether it too will miss the next major market/platform shift. Or will it somehow be able to get ahead of it and maintain its leadership position (and stock market premium). Some long term platform shifts that are just now beginning include the rise of the mobile Web and the shift to cloud computing—both areas where Google is putting a lot of resources.

But in the short term, the biggest growth opportunity for Google is to extend its dominance in search advertising to display advertising. In a report issued yesterday, Citi analyst Mark Mahaney lays out Google’s opportunity and what it needs to do to make sure it does not slip away. The vast majority of Google’s revenues, which were $16.6 billion last year, comes from search and contextual advertising.

Mahaney estimates that every one percent gain in display advertising market share that Google can grab will translate into about $200 million in incremental revenues and $50 million in incremental net profits. So if Google can get ten percent of the display ad market, that would add about $2 billion in revenues and $500 million in profits. Even that would amount to only a 12 percent boost to its 2007 profits of $4.2 billion. But Google needs to establish itself in display to keep its current market premium. 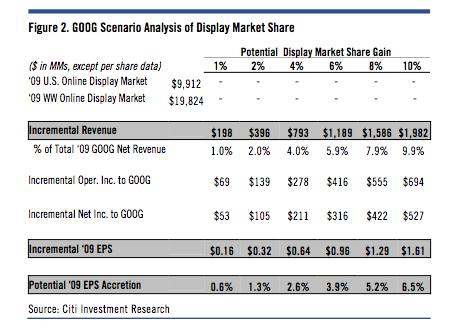 But the single biggest opportunity for Google to become a major player in display advertising is not DoubleClick. It’s YouTube. At least in the short term. Mahaney estimates that Google can sell $500 million worth of display ads (including video ads) on YouTube in 2009. In contrast, he estimates that DoubleClick will contribute only $280 million in revenues in 2009. Google Images, Google Maps, Google Videos, and Google Finance could bring in another $265 million, if fully plastered with ads.

Here’s how he comes up with those numbers. First he applies a $1.13 CPM estimate for MySpace to YouTube, factors in a 50% growth in pageviews, and backs out a 40% revenue-share to come up with $491 million in display-ad revenues. These numbers maybe aggressive, though, because so far Google has sacrificed ramping up revenues on YouTube for market share gains. In fact, Mahaney’s analysis of the top 100 videos on YouTube right now shows that only 28 have ads, and onlyone of those is an interactive overlay ad. (The rest are banners or AdSense). 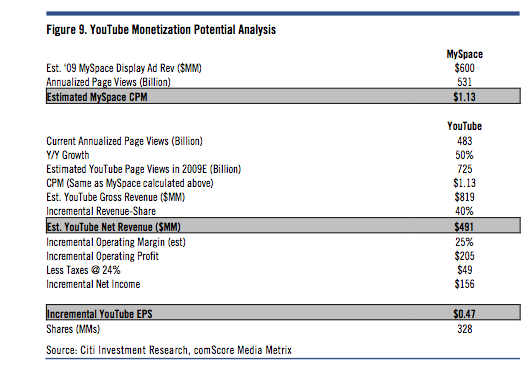 He applies the same CPM to Google Images, Maps, Videos, and Finance. Again, putting as many ads on these properties as there are on MySpace could sour some people on using the various services.

Add in the $280 million estimate for DoubleClick, and all together that’s a potential $1 billion in extra revenues for Google next year. It wouldn’t be a lot compared to Google’s overall revenues, but it would begin to assure investors that Google is not going to let its leadership lapse.