If you don’t have an all-you-can-eat subscription plan for your mobile phone that includes text messages, those messages can really add up on your bill. Especially if you are a teenager. Or a Twitter addict. Now there is a way to bypass those costly text-message fees when you are online. A new service by 3Jam called SuperText is launching in private beta that detects when you are at your computer and lets you send and receive text messages for free.

The first 100 Techcrunch readers to send an email to cathy[at]3jam[dot]com will get priority invites to the private beta. If you don’t get one, you can sign up here to be put on the waiting list.

Whenever you are logged into the service on your computer, it reroutes text messages sent to your phone so you don’t have to pay for them. And the text messages you send appear to recipients as if you sent them from your phone. It will soon work with 3Jam’s Facebook-to-SMS application as well. CEO Andy Jagoe describes SuperText as “an IM-like experience with SMS on the backend.” When you walk away from your computer or don’t respond after a certain amount of time, the message gets sent as a regular SMS to your phone.

SuperText will join 3Jam’s existing reply-all SMS service that is already used by three million mobile phone subscribers. I recently wrote about Jagoe’s attempt to run test ads on Facebook for SuperText, only to find that the term 3Jam was oddly blocked, along with other terms such as “Myspace” and “Hi5” (After the post ran, Facebook stopped blocking those terms). 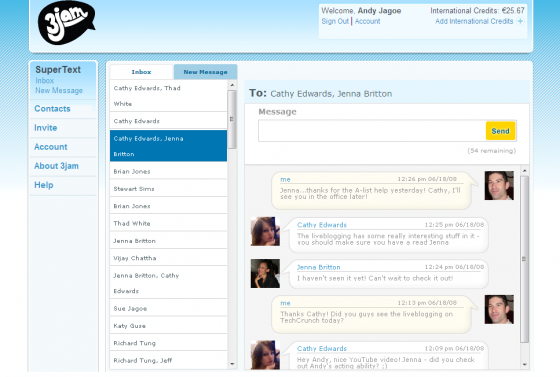