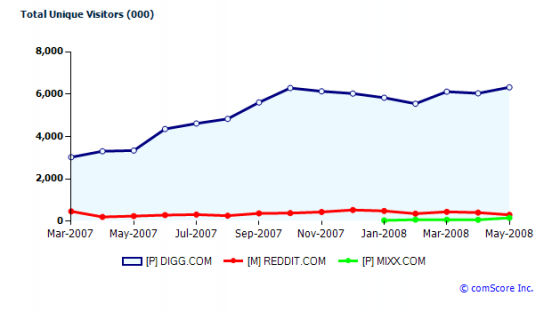 It is not easy being No.2. As we hinted yesterday, Reddit, the news voting site that was bought by Conde Nast in 2006, is making the code behind its site open source. (The code can be found here). That means anyone can now make their own Digg-like site. Not that there has been any lack of Digg clones in the past. Reddit’s move to open-source its software is merely an acknowledgment that it is already a commodity.

And the winner here clearly is Digg (as long as it doesn’t alienate it’s core users), despite valiant efforts by Reddit, Mixx, and others. In May, Digg had more than 20 times as many U.S. visitors and pageviews as Reddit, according to comScore. Even if comScore is undercounting, and the relative gap is only half that much (which is what data from Compete suggests), it is still pretty insurmountable.

(Note that comScore is almost surely undercounting Reddit. It measures only 300,000 unique U.S. visitors in May versus 6.3 million for Digg. Whereas Compete measures 2.4 million versus 24 million, respectively. That is why it is more informative to look at the relative gap than the absolute numbers in this case). Here is a comScore chart comparing pageviews. See how flat Reddit has been all year. 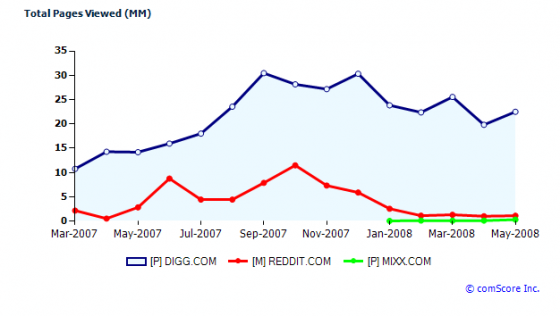