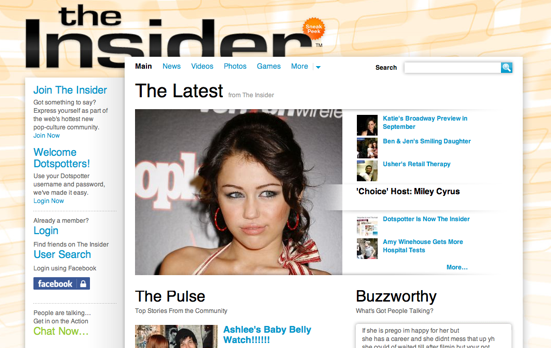 After paying a reported $10 million for celebrity gossip blog and news site DotSpotter in October 2007, CBS has relaunched it as TheInsider.com. The new site is tied into CBS celebrity gossip show of the same name, The Insider. Dotspotter was like a Digg for celebrity news, and that aspect is retained in the new site where stories can be voted up or down. They can also comment on stories and submit their own, which have chance to make it to homeage, alongside posts written by the site’s editorial staff.

The site is integrated with the TV show and presumably will be promoted on air. It is a place for the TV audience to hang out online, and also a platform for celebrity bloggers who want to reach a wider audience and maybe get on TV (if the show ends up pulling content from the site, as it should). Bloggers can submit their RSS feeds, and the site’s editors republish what they like. There is also a mobile version of the site.

TV drives a lot of traffic, and this could help TheInsider.com gain ground on other celebrity/entertainment sites such as PopSugar or even People.com. (Although, People.com, which just bought Celebrity Baby Blog, is in a class by itself and doesn’t really need TV).

This is really a cross-platform play for CBS (TV, online, and mobile) and hints at how it may approach other acquisitions, such as parts of CNET (which owns TV.com). Whether or not this strategy succeeds depends on whether or not a TV audience constitutes a genuine community. Does it?

People who watch the same TV shows certainly share the same interests, but those interests may be so broad that the communities that form around them end up being not that interesting.