Not a week after we derided Brightcove for its difficult user interface in a story about newly emerged competitor Delve Networks, the Cambridge-based video hosting company is releasing a completely rebuilt version of its service into private beta.

Existing SaaS customers now have the opportunity to try out Brightcove 3 Beta, which will be made available to new customers sometime in the Fall. Development on Brightcove 3 began about nine months ago and has focused on three primary areas: a new publishing model, support for long-form video and, last but not least, an improved user interface. 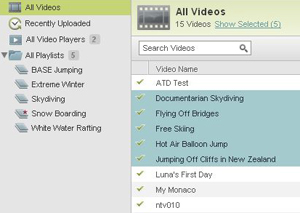 The new publishing model centers around Brightcove’s first server-side API, which allows publishers to deeply integrate video meta data into their display pages. Publishers can choose to highlight related videos in ways that make the most sense for their content (perhaps by organizing them into lists that can be browsed by topics or names). They can also display descriptions, and choose URLs, that optimize SEO. As far as monetization is concerned, in-page advertisements can be synchronized with in-video ads to make for more effective impressions.

Brightcove has never put any limits on the lengths of the video uploaded to its platform, but until now it never tailored the delivery of longer video to users’ technical capabilities. The new version places Move Networks (a platform that specializes in the delivery of long form video) in its sights by adjusting delivery quality based on bandwidth and computational power. Brightcove wishes to become the single platform that publishers use to deliver both short and long form content, without requiring users to install a proprietary plugin, as Move Networks does (Brightcove delivers its video through Flash).

Finally, Brightcove 3 has been blessed with a new user interface that doesn’t require publishers to skip around between tabs to address different parts of the setup process. An iTunes-looking control panel takes advantage of drag-n-drop and batch editing capabilities, which should streamline the addition and editing of videos.

Brightcove is certainly one of the biggest, if not the biggest, video platforms for web publishers. According to internal statistics, the videos on its platform are viewed by 135 million uniques per month, and revenues experienced 500% growth in 2007. Publishers include Discovery, National Geographic, Showtime, and several other big media companies.

The company hopes that this release will help it expand internationally (it already has a strong presence in the UK and has taken direct steps to establish one in Japan). Brightcove is also soliciting non-media companies like non-profits and governmental organizations in addition to integrating more deeply into existing publishers’ websites.