Smibs, a new business startup out of Canada, has just launched in private beta. The site is a combination between a business network, dubbed SmibsNet, and an application platform. The site plans to launch its public beta in July.

SmibsNet is comparable to other business networking sites like LinkedIn in that it allows users to view the past experience and skill sets of prospective business partners. Smibs founder Peter Urban says that SmibsNet differentiates itself by focusing on actively completing projects, rather than simply acting as an online resume. Users can use the SmibsNet dashboard (called the Smibs Lounge) to get updates on projects and companies they’re involved with. 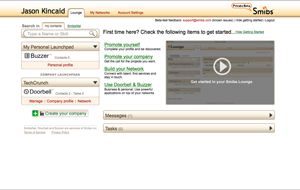 The other portion of Smibs that is launching today is Doorbell, a Highrise-like site that is the first application running on Smibs’s platform. Doorbell describes itself as a “sales software application for non-sales people”, allowing users to track contacts, tasks, and opportunities for sales leads. The application is integrated with SmibsNet, so users can easily exchange contacts and tasks between the two services.

For now Doorbell is the only app available on the Smibs platform, but Urban says that more are on the way. There are a lot of companies in this space with very mature offerings – much of Smibs’s success will likely be tied to the quality of the company’s applications, and their ability to roll them out quickly.