The only thing you can count on with most projects is that they won’t come in on time. And the more people involved, the greater the uncertainty grows. There is no lack of project management software out there to try to contain this uncertainty: 37Signals’ Basecamp, Clarizen, Daptiv, Huddle. Wrike, Viewpath, Microsoft Project. But one that is launching commercially today after a few months in private beta, LiquidPlanner, is specifically designed to account for unplanned events and delays. Explains LiquidPlanner CEO and co-founder Charles Seybold:

Henry Gantt created the Gantt Chart in 1910. It is a single point estimate, and it doesn’t actually work. Project management is always broken. Two thirds of projects fail to come in either on time or on budget.

We fully embrace the idea that project management is a social application, It is not about one guy in the back room with a super calculator. Project management has to be personalized to each person in the project.

With most project management software, everybody on the team gives an estimate of when they will be done with their part of the project. As people start to miss those deadlines, the whole project gets delayed because someone is always waiting for that unfinished piece of work before they can start their part. Instead of asking project members for single-point estimates, LiquidPlanner asks for estimates in the form of a time range. Like the familiar Gantt Chart, it displays the overlapping ranges in bar graph form.

But Seybold calls these “Uncertainty Gantts.” Project members can adjust the range estimates as their work progresses or stalls. When one person runs into trouble and his estimate extends too far, it shows up in red so that a product manager can deal with it before it jeopardizes the rest of the project. Everyone on the project can also see how much work has been done on the project over time and how much has been completed. Managers can see who is completing their work on time, and who the bottlenecks are.

LiquidPlanner is free for up to three people. Companies start paying once they add a fourth person ($35 per month, per member, or $300 per year). Paying subscribers get 50GB of storage. At each phase, participants can add links, documents, images, videos, and other attachments. And e-mail notifications are built into the system to remind people when a deadline is approaching or when a task has been completed.

The startup is based in Bellevue, Washington. It was founded in March, 2006 by Charles Seybold and Jason Carlson, who led software teams at Expedia. Seybold ran the core software engineering team at Expedia and was in charge of project management. Before that he worked on Microsoft Project. (He estimates Microsoft Project is now a $1.2 billion-a-year business). LiquidPlanner raised $1.2 million in January, 2008 from angel investors in Seattle (including Seybold and Carlson, who put in more than half the money themselves). The service already has attracted over 10,000 users since launching in private beta last January. 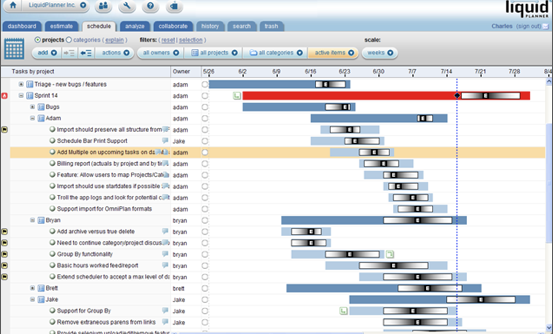