Today in Berlin HP announced the Voodoo Envy 133 notebook that was hinted at last week in the video teaser I posted. Voodoo is aiming to take on the MacBook Air and the Envy is ready for the bout. The Envy 133 has an LED backlit 13.3-inch screen, carbon fiber body (super lightweight), multi-touch trackpad (I just tried it out and it stinks. I’ll get a full demo later on, but there’s a short video after the jump. It pinches but doesn’t do the rotation.), built-in ethernet port into the power brick, removable battery, HDMI port, two USB ports, and an express card slot. The Envy’s starting price of $2,099 is less desirable, though. Another unique and cool feature for the Envy is Voodoo InstantOn, which allows the user to boot to a Linux screen with seconds of starting up while Vista boots in the background. Check out the video.

The Omen starts out at $7,000 and features a 7-inch auxiliary LCD on the front of the case and copper liquid cooling pipes. You can also add a touch of your own flair by picking from Voodoo’s Allure paint color choices, Ink designs and Iconograph patterns. Also worth noting is that the Omen will only be available to current Voodoo customers until production is in full swing. 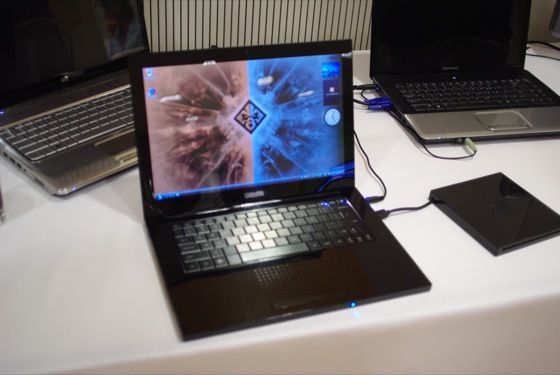 The head-turning ultra-mobile notebook
Measuring just over half an inch thin and weighing less than 3.4 pounds,(2) the Voodoo Envy 133 is a showcase of ultra-mobility and thermal engineering in a tiny, sophisticated chassis. Its Voodoo IOS (Instant-On Solution) makes it one of the fastest-loading systems ever launched by HP, giving mobile users near-instant access to the Internet and Skype.(3)

The Voodoo Envy 133 was developed using the smallest available Intel® Centrino® technology. Despite its small size and elegant design, the notebook offers a wide range of functionality typically associated with larger notebooks, and includes Ethernet and wireless connectivity,(4) a wide selection of ports, a replaceable battery and more.(5)

“We worked with HP to enable the Voodoo Envy 133 to be as small as possible without losing key features such as performance and battery life,” said Mooly Eden, corporate vice president and general manager, Mobile Platforms Group, Intel. “The final outcome is a terrific notebook that showcases the benefits of our Intel Centrino platform, which retains a high level of performance and low-energy consumption even after we shrunk it by more than 50 percent using our expertise in packaging technology.”

To appeal to everyone’s unique tastes, customers can personalize their Voodoo Envy with Voodoo Allure paint colors and a selection of Voodoo Ink designs and Voodoo Iconograph patterns. A high-quality, backlit keyboard, full 13.3-inch LED display and coordinated peripherals add to the overall styling and sophistication of the notebook.

The Voodoo Envy 133 will be available for a starting price of $2,099.(1) Other key features include:
• Voodoo Aura PowerConnect – establishes a one-to-one wireless connection between the Envy 133 notebook and an Ethernet connector located on the power supply, allowing users to roam free from the wired connection.(3)
• Multiple gesture touchpad – more than a standard touchpad, the Envy 133 also provides capabilities such as a circular gesture called chiral scroll and pinch options.
• Durability – the carbon fibre casing and fused composite glass covering the display provide surprising strength and durability.
• External optical disk drive – an ID-coordinated external eSATA optical drive is included with every unit.
• Professional backlit keyboard – reminiscent of old-school tactile desktop keyboards with just enough “click” to get even the most die-hard tech enthusiast smiling.
• Ports – extensive usability via a variety of I/O ports, including headphone/microphone, HDMI, USB 2.0 (1x) and a shared e-SATA/USB (1x).

The Omen features integrated copper liquid cooling pipes and a built-in, fully functional LCD auxiliary screen. Its advanced thermal engineering with liquid cooling makes it run quietly, even when performing at high levels.
Customers can add the finishing touches to their Voodoo Omen via an extensive palette of Voodoo Allure paint color choices and a selection of Voodoo Ink designs and Voodoo Iconograph patterns.
The new Voodoo Omen will be available for a starting price of $7,000.(1) Other key features include:
• Vertical diffusion thermals – the power of natural convection currents is harnessed for advanced cooling and quiet acoustics.
• Auxiliary LCD – a 7-inch (diagonal) built-in auxiliary LCD is a full-function secondary display.
• Advanced liquid cooling – copper cooling pipes embedded in the chassis, aircraft-quality quick-release hose connectors, and more combine in one of the most advanced liquid cooling systems on the planet.
• Tool-less architecture – side panels, hard drives, video cards and other critical components can be removed without tools.
• Top-loading cables – cables plug into the system under a removable top panel, improving access to the cable connections and contributing to the clean exterior design.
• Interior lighting – battery-powered interior lighting gives users visibility to upgrade components when the system is powered off.