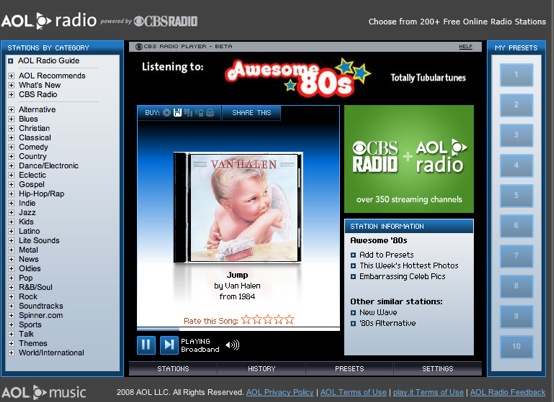 Even on the Web, radio is local. People still tune into their favorite college or hometown radio station from hundreds of miles away. Today’s relaunch of AOL Radio (in beta) embraces that aspect of radio in many ways. First and foremost is its partnership with CBS Radio, which is replacing XM Satellite as the provider of music for 150 radio stations on AOL Radio (AOL itself continues to program another 200). Along with providing much of the music people can listen to for free, CBS is also taking over selling the ads. CBS sales teams are already selling local radio ads, and now those teams will be selling ads on AOL Radio as well. CBS Radio’s ability to sell local ads was major reason why it won the partnership deal, especially with online music royalties increasing sharply. Lisa Namerow, the general manager of AOL Radio, tells me:

The royalties have gone up significantly. We had to reevaluate our business. We needed to partner in order to monetize radio better. We have grown advertising year-t0-year 100 percent, but with the increasing cost of royalties, we need to do a better job by leveraging local markets and advertisers. CBS has a string foothold in that local sales market, with over 140 sales teams.

That statement is an eye-opener for any music service hoping to make money from advertising. If AOL Radio, with three million unique listeners per month (according to Namerow), is having a hard time, how are smaller ad-supported music startups supposed to survive? And affiliate links are not going to cut it. Every song on AOL Radio has a link to iTunes or Amazon, yet Namerow cautions that “those commerce links are a very minor revenue source.”

So how does the new AOL Radio stack up versus other free music services on the Web? It is not bad for basic radio-listening, but is lacking any social features beyond the ability to share a station via email or AIM. It is definitely a vast improvement over the old AOL Radio, which didn’t really work that well in most browsers other than Internet Explorer. The new AOL Radio pops up in a separate Flash player that works on IE, Firefox, and Safari. There is plenty of music and sub-genres to choose from. Some stations: Rock Anthems, ’80s Alternative, Salsa, Rockabilly, All Stevie Wonder, Sports, and Opera. You can also search stations by city (that local thing again). The player highlights 10 preset stations, but you can manage an unlimited amount of presets and change them around.

AOl has also done a better job of deep linking into AOL Music. If you mouse over any album cover, links to album, artist, and song information appear. The service also keeps a history of every song you listen to so you can learn more at your leisure. There is also a pause and skipping ability. You can skip six songs per hour. And right now there are about four video ads per hour. I don’t mind the ads as long as there aren’t too many. But one suggestion: don’t subject people to an ad at the very beginning before they can even listen to one song.

Update 6/12/08: AOL Radio also designed an app for the new iPhone, which was one of the winners of the Apple Design Awards. The iPhone App notes your location and serves up the nearest CBS tradio stations, so it acts like a regular radio in that regard.