You’ve got a week in vacation time that’s about to expire, an economic stimulus check that’s burning a hole in your pocket, and a passport that hasn’t been opened since the Clinton administration. So, where to?

TravelMuse (formerly known as TripOvation) just launched in public beta, and is looking to help. The site asks users a series of simple questions and, using their input, tells them where they should consider traveling. The site rounds out its suggestions with weekly editorial content from 50 freelance writers, all of which TravelMuse says is objective and fact reviewed. 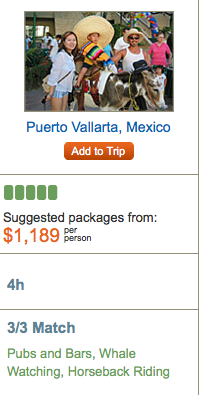 The suggestion process is simple: enter your city of origin, the amount of money you can spend per traveler, how far you’re willing to travel, and which of the available activities you’re interested in. Activities listed on the site run the gamut from Whale Watching to Hot Air Ballooning, though travelers with more obscure interests are going to be left in the dust. The site takes the entered information and spits out up to eight matches, ranked by their compatibility.

TravelMuse then generates a number of pre-configured travel packages that fit into your price range, and users can read up on local POI’s with the site’s comprehensive database. The site also facilitates group travel by allow friends to share suggested trips with each other.

One of the nice things about TravelMuse is that it relies on information that has been manually entered by experts, not some complex Google algorithm. Of course, this could pose a problem in the future: if the site ever adds a new activity, somebody will have to go back through every city to see if it offers it.

At this point TravelMuse seems like a good place to start when you’re beginning to plan a trip, but it probably isn’t the best place to actually book it. Users looking to get the best deal will probably want to turn to more comprehensive hotel and flight searches like Kayak. But as a hybrid travel magazine/suggestion site, TravelMuse may well find a place in the crowded travel space.