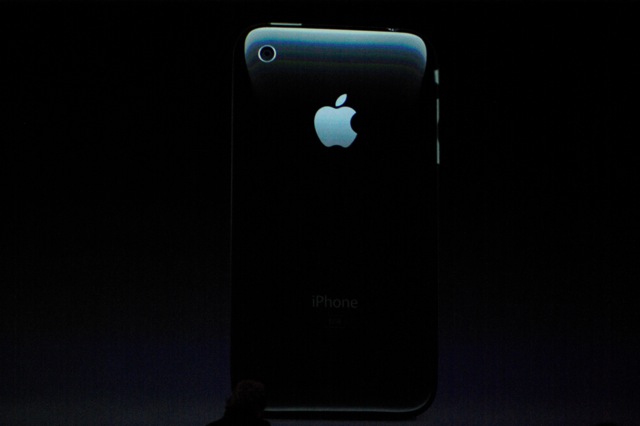 Steve and his friends had a great presentation where we saw new apps for a bevy of developers, most of them pretty good looking.

But the star of the show was the new iPhone 3G, a slimmer, faster version of the handset we all know and love. I talked to Glenn Lurie from AT&T Mobility earlier to clear up a few lingering questions. Sadly, most of what he told me were qualified “no comments”, but we were able to glean a couple nifty tidbits about AT&T’s involvement with the new phone.

Many were wondering if the lower price would mean a subsidy from AT&T. The new contract prices seem to indicate that it does, though Lurie couldn’t go on record about that. One fear some had was that Apple would have to pull the phone from the Apple store, selling exclusively through AT&T retail outlets. This won’t be the case. The iPhone 3G will continue to be sold through AT&T and Apple, good news for many.

Another question was about the speeds. The iPhone 3G uses UMTS as well as HSDPA, getting average speeds, he said, of about 1.4Mbps down. That’s roughly equivalent to a T1, which is pretty fast. I use an AT&T Tilt as my mobile modem which connects at that speed and it’s fast enough for just about anything.

Lurie said that there would indeed be a trade-in program for current iPhone users, but only recent ones. If you bought your iPhone after May 27, 2008, you’re eligible for an upgrade to the 3G iPhone when it comes on July 11. He couldn’t comment if it would be a straight, free one-for-one trade, but he said details would be coming soon.

As for other iPhone owners, he couldn’t give me details, but he said that they wanted to make sure that early adopters of the original iPhone would also be able to easily get iPhone 3Gs in their hands. It sounds like some special contract deal for current customers, but we’ll have to wait on details.