Believing that health sites need their own ad network, Healthline is bringing its semantic search technology to advertising. The health search engine is launching the Health Media Network, an ad network that will place contextual ads on health Websites. It is like an AdSense for health sites.

But instead of relying simply on matching keywords on the page where the ad is being served, Healthline says it can serve ads that match the health concepts on the page. So an article that mentions the medical term “costochondritis” (an inflammation of the rib) might serve up an ad for ibuprofen (the most common treatment).

Healthline has created a taxonomy of 200,000 related health terms and concepts for its search engine, and is using the same underlying technology for it new ad network. It will be powering contextual health ads on its own search engine as well as partner sites such as United Health’s upcoming MyOptumHealth; AARP, Health.com, HealthPricer, JustAnswer, and USNews.com. All told these sites reach 10 million people a month, says the company.

Healthline itself has shown more zig-zag performance, most recently attracting 3.4 million visitors to its site worldwide in April, according to comScore. That was down from 5 million the month before. 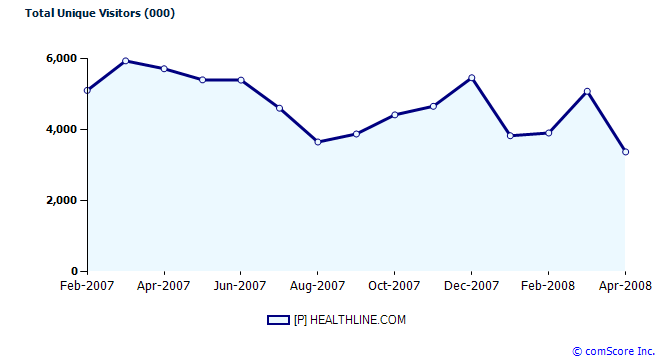