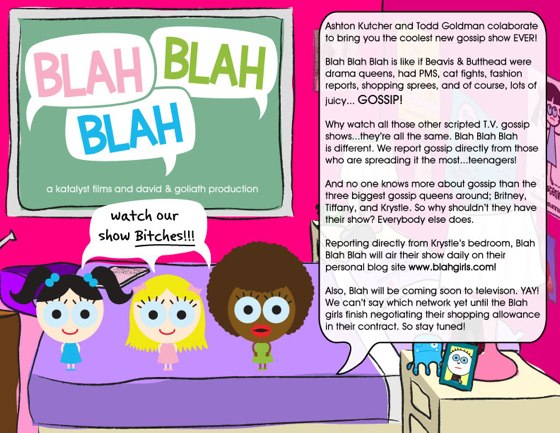 More details on the some of the interactive new media properties being created by Katalyst Media (the production company created by Ashton Kutcher and Jason Goldberg).

One of the properties they’ll be showcasing: Blah Blah Blah (to be at the domain Blahgirls.com per the image above, but the site is not yet live). It will be a daily cartoon gossip show hosted by “Britney, Tiffany and Krystle” that aims to be “like if Beavis & Butthead were drama queens, had PMS, cat fights, fashion reports, shopping sprees, and of course, lots of juicy…GOSSIP!” The show will be set in Krystle’s bedroom – the preview version I saw had them watching a real video on a cartoon television and commenting on it. And yes, it was pretty funny.

Katalyst is also saying they’ll be packaging the episodes for television as well, and have a deal with a network in place. Comedy Central or MTV are the obvious guesses, but I actually don’t know who they’re partnering with.

We should have more next week.