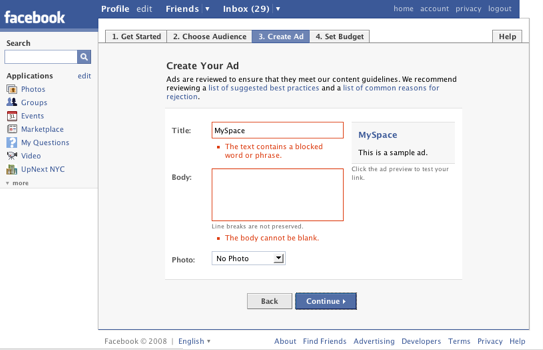 If you try to buy an ad on Facebook, there are certain words that are taboo. Any ads that contain four-letter words are automatically blocked. So too are ads with the names of competing social networks “MySpace,” “Friendster,” “Hi5,” , or “Orkut.” (Curiously, “Bebo” and “OpenSocial” go through just fine, as does “Microsoft,” “Yahoo,” “Google,” and “AOL”).

Okay, so Facebook doesn’t want to run ads for some of its competitors. But why is 3Jam blocked? The startup offers an SMS service that lets people send multiple text messages at once, and it even has a Facebook app that does the same thing.

CEO Andy Jagoe was befuddled when he tried to create a Facebook ad to test a new product, only to find out that the term “3Jam” was also blocked. (The product actually sounds pretty cool: it will be a way to send and receive text messages for free while you are online, and then route them to your phone when you are offline). Says Jagoe:

It seems crazy to think that they consider us competitive. This is kind of weird. It is like censorship.

It does seem weird. What other startup names or products are blocked by Facebook?