Crowd Science, a new demographics service that aims to help online publishers maximize their audience and ad revenue, has launched today in an invite-only beta. The site compares itself to Google Analytics, but explains that it focused on “demographics and attitudes rather than clicks”. The first 100 TechCrunch readers to go here and enter TECHCRUNCH as the promo code will be able to join the beta immediately.

The service tabulates demographic data by sporadically offering users an offer to participate in an embedded survey. To cut back on phony entries, the site only offers the survey to visitors it deems acceptable (it would probably rule out IPs that refreshed a page numerous times). Surveys are also presented in an unobtrusive fashion in the hopes that only people that are genuinely interested in participating will do so.

Crowd Science’s real value emerges after the data has been collected. The site performs detailed analysis of the customizable surveys, presenting site publishers with trends including age, sex, and income, that they can use to help tailor their content and advertising. Finally, the site also allows publishers to create “Media Kits” containing selected portions of their data results which can be sent to advertisers. 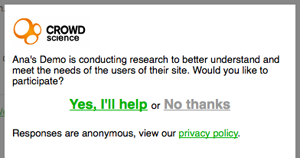 Of course, Crowd Science is going to be running into one major problem: people need to honestly take these surveys for the site to have any real value. For the time being, there isn’t any incentive for anyone to fill out the survey – instead, the site is relying on user interest. At first glance this sounds like a fatal flaw, but Crowd Science CEO John Martin counters that most people are willing to fill out a survey on sites they are genuinely interested in. He also explains that these surveys really only need 800-1500 participants to be statistically relevant.

Crowd Science will see competition from a number of audience-analyzing sites, including Vizu and, to some extent, NetRatings. The site raised $2 million in Series A funding from Granite Ventures last December.