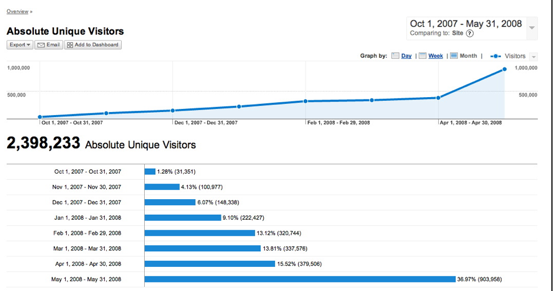 May was a good month for social-news site Mixx. At the beginning of the month, CNN.com put “Mixx it” buttons at the end of every article on its site. Consequently, the number of unique visitors to Mixx more than doubled from 380,000 in April to 904,000 in May.

To put that into perspective, only 2.4 million people have ever visited Mixx since it launched in September, 2007. In other words, more than a third of all the people who have ever gone to Mixx, went there last month.

Those numbers come from Mixx itself, which sent us a screen shot from its Google Analytics page (click on it above to see a larger image). That hockey stick you see at the end is the CNN effect. Third-party measurement services such as Compete, ComScore, and Quantcast only go through April right now, and are widely divergent on the numbers they do report for the site (168,000, 65,000, and 53,000 U.S. uniques, respectively). But they all do show a similar trend of flattish growth most of this year through April. When they include May numbers, we’ll see if they register the CNN spike as well.

Mixx still has a long way to go to catch up with competitor Digg, which had 6 million U.S. visitors in April, and 13.8 million worldwide, according to comScore. (Digg self-reports 26 million users).