Every year millions of people lose their photos, documents, and music to the mechanical squeals of hard drive failure. Despite the consequences, few people ever get around to actually backing up their data – it’s just too much of a chore.

For many, Apple finally hit the nail on the head with Time Machine, which lets users plug an external drive into their computers and forget about it. Backblaze, a new startup out of Palo Alto, is trying to take Time Machine’s simplicity and apply it to a cloud-based online backup solution. The service is currently Windows only, with a Mac version expected in the next few months. You can grab one of 500 invites to the private beta here. 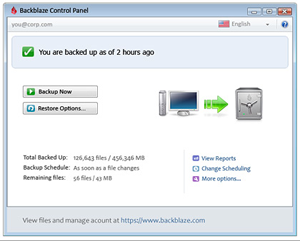 Backblaze advertises a “3-click setup” that forgoes many of the customization and file selection options commonly found in backup programs. Instead, users simply click “Backup Now”, and Backblaze will upload the entire contents of the hard drive (minus system files) to the company’s servers. After that, a small program runs in the background and monitors files for changes. Recovered files can be delivered through an online interface, USB disk, or a DVD.

While Backblaze has tried to keep the amount of user interaction required to a minimum, more advanced features like bandwidth throttling or file exclusion can be found tucked away in a separate menu. Users can try out the service free for 15 days – after that, the price is $5 per month for each computer for unlimited bandwidth and storage.

Unfortunately Backblaze is plagued by the common enemy of all online backup providers: slow upload speeds. It can take weeks (or more) for users to upload their massive media libraries. And while a slow backup is infinitely better than none at all, many users may be put off by a “two weeks remaining” progress indicator.

Backblaze will see competition from a number of well established players in this space, including Mozy, Carbonite, and SugarSync. The $5 monthly fee is nice, but it isn’t unique – most of the other providers have plans with similar price points.