Webpage to 3D space provider ExitReality has soft launched today via a cross promotion with CKE Restaurants (Carl’s Jr and Hardee’s) that will see the product promoted to millions via the Carl’s Jr website and through a MySpace advertising campaign.

I originally sat down and spoke to the ExitReality team (the company has its HQ in London, but the dev team and CEO are in Australia) for TechCrunch back in April. At the time they explained that the product dynamically creates 3D spaces for social networking pages (no need to install anything on the site or for site owners to be signed up, the visitor only needs a plugin), but they held back on some of the other details. Here’s what they didn’t tell me the first time

Another interesting aspect is the way the platform works; unlike Second Life that relies on centralized servers, the ExitReality plugin renders the page based on the details of the page, so it doesn’t need to rely on centralized servers (the only aspect that would be lost in the case of downtime would be chat). Further as users interact on and around each page, those visitors are counted in local logs, so a website owner doesn’t lose traffic; in effect this is a visual layer the browser sees but with the original content at the original page.

ExitReality is describing today’s launch with Carl’s Jr as a “closed beta” but closed isn’t the right word. When it’s fully launched registration won’t be required to interact in a 3D space, and even then it will only be required if you wish to customize your own spaces. With today’s launch registration is required upfront to experience a 3D space, but registrations are unlimited with the proviso that they may be limited later if they cant support the downloads well enough.

For the CKE cross promotion, ExitReality has built a virtual Carl’s Jr Outlet and Carl’s Jr apartment (video above) where people can gather and interact. Every item within the space can be copied to a members own space, including a mechanical bull, a Burger Slayer game, as well as 3D widgets such as TVs, arcade game machines, furniture, and even a 3D living room or restaurant layouts to decorate their own pages.

If you want to give it a shot, click the button to the right to sign up and be taken to Michael’s apartment space based on the TechCrunch MySpace page (pics below). ExitReality is Windows only (both IE + Firefox) at this stage, but is believed to work in a virtual machine. 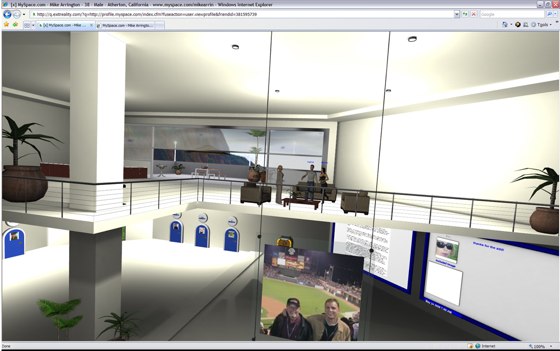 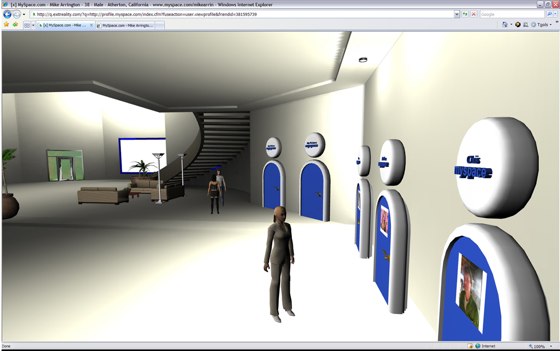 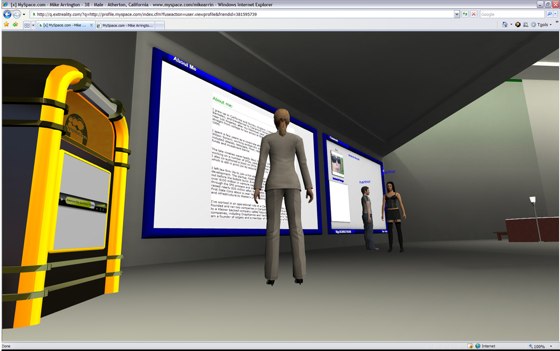