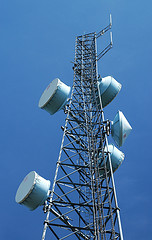 Is AT&T pushing tower-climbing workers too hard as it rolls out its 3G data network in preparation for the launch of the next iPhone? Philip Elmer-Dewitt at Apple 2.0 notes a curious rise in cell-tower deaths over the past five weeks. Since April 12th, six cell-tower technicians have fallen to their deaths, and at least three of them were working on AT&T projects. During the four months before that, there were zero cell-tower fatalities.

An AT&T spokesperson denies there is any connection, telling DeWitt that the $20 billion upgrade of AT&T’s data network requires no more than a “software upgrade” at the base of each tower. Yet surely there are times when the towers need to be climbed to troubleshoot the new set-up, place testing equipment on the tower, or remove old equipment that is no longer needed.

When Apple 2.0 previously ran a story about AT&T’s rush to roll out its 3G network in 275 market by the end of June, one commenter from North Carolina named Duke asked:

At what costs? There has been such a rush to get the “3G” up and running that communication tower workers are pushed to their limit. As a safety manager and a communication worker I find it hard to justify the “Hurry up and be SAFE” mentality. One of the largest construction management companies preach the 0 accident policy but force you to get this done at next to nothing in a obserd [sic] time frame and a company who used to be raising the bar are certainly not sharing all of the info. Check http://www.wirelessestimator.com to get an updated list of 3G fatalities. I am sure that the companies in question will state they require a 100% tie off but when push comes to shove get the job done.

Apple is expected to announce its 3G iPhone in June. Hopefully, nobody else will have to die for AT&T to be ready for it.