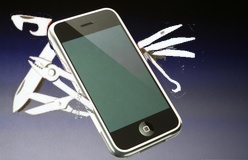 SwissCom, who you’ll remember offered some potential pricing for the 3G iPhone, confirmed it is getting said iPhone “later this year.” Their exact words:

Later this year, the iPhone available. We will inform you personally as soon as news.

I’ve worked with SwissCom in the past and those boys wouldn’t inform you you were on fire unless they had a sworn, notarized affidavit from your burning underwear, so let’s chalk this up to “confirmed.”