Few things are more annoying than two week-old podcasts. Yet it seems that every time I’m about to embark on a long train ride, I forget to sync my iPhone with iTunes, leaving me with stale news reports. Stitcher, which launches today in public beta, looks to put an end to this problem by providing a customizable and continuous stream of news, talk, and sports to your iPhone and computer.

Stitcher offers hundreds of audio feeds to choose from (including TechCrunch), categorized by topic or source. The site uses a personalization algorithm to recommend audio content (think Pandora for everything but music), but users are also able to set up playlists of their favorite material. While most content is drawn from audio RSS feeds, which can be found on most major news sites, Stitcher has also employed professionals to read a number of popular news sources aloud. 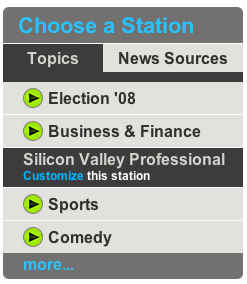 I have mixed feelings about Stitcher’s potential. While the desktop-based version of the website works as advertised, I have a hard time picturing many people sitting at their computers listening to recommended news articles and debates. This works well enough with music, but news content is much more involved – generally you need to pay more attention to what is being said, which probably isn’t how most people will want to spend their free time.

On the other hand, the iPhone version of the site has a chance to be a runaway success. The prospect of having my favorite blogs and podcasts streamed to my iPhone without ever having to sync up with a computer is very appealing. Right now the iPhone version of the site is clunky, mostly because of issues with iPhone’s integrated Quicktime player (though streaming over Edge works surprisingly well). But these problems should be short-lived, as Stitcher’s development team is hard at work on a native iPhone application which could see the service really start to shine this June, when Apple releases its sanctioned app store.

For the time being Stitcher is certainly worth exploring, but it probably won’t reach its full potential for a few more months. Keep an eye on this one.