Smalltown, a company out to help local businesses establish themselves online, is spreading its reach on the web and in the real world by founding a new site at WebCards.com.

We first reviewed Smalltown in October 2006 when it launched a destination site for so-called “WebCards”. These compact mini-sites provide overview information about businesses located in any of 6 Bay Area cities. They are categorized according to business type and designed to show up highly in search results, despite being based entirely in Flash.

By default, they show information leased from a local data source and are displayed for free. However, businesses can claim their webcards for $600/year, thereby taking control of them and gaining the ability to add special content like videos, photos, coupons, and contact forms.

Until now, these webcards could only be found in the areas of Smalltown’s destination site designated for particular cities. But now with the launch of WebCards.com, businesses from the world over can create their own webcards and embed them anywhere on the web. Smalltown has also formed partnerships with companies like Trulia to distribute them more proactively to external sites. And when webcards are visited through search engine results, they’ll appear as standalone sites instead of just part of a local directory. 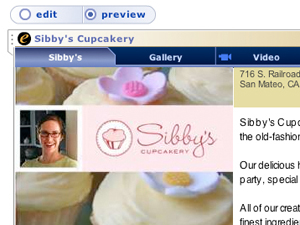 It’ll cost $9/month for businesses to create webcards on WebCards.com. The company plans to create more destination sites around particular cities on Smalltown.com; just which cities depends on those that accumulate the most webcards on WebCards.com. When new city destination sites are established, business owners will have the opportunity to pay extra and have their webcards posted on them.

CEO Hal Rucker says the new WebCards.com property constitutes a strategy to broaden the company’s scope, in contrast to the depth and focus of Smalltown.com. So far only about 600 businesses have created so-called “enhanced webcards” for $600/year. It’ll need over 60 webcards created on WebCards to make as much revenue as one on Smalltown, where these cards have higher visibility. Businesses will have to be convinced that the cards’ portable nature and SEO juice pays off, although $9/month isn’t a hard sell.

Smalltown differs from other sites for local business information like Yelp in that it focuses on merchant-created content. While Yelp has recently given more power over listings to businesses, it remains a consumer and reviewer-focused site.