Crowdsourcing sounds good in theory—pull together a bunch of smart, motivated individuals from across the Web to create a new product or business—but in practice it is not so easy to pull off. One of the first major casualties of the crowdsourcing movement looks like it will be Cambrian House, the Calgary startup that tries to organize the crowd around creating new ideas for Websites and software products. After unsuccessfully trying to raise a new round of capital, it is our understanding that the startup has negotiated a fire sale of its intellectual property, assets, Website (and whatever community remains after the sale) to Spencer Trask Ventures, a New York venture firm inspired by the financier who originally backed Thomas Edison.

The deal is structured as an asset purchase, after devolving through various stages from initial talk of a new investment to a joint venture to a buyout. The more Spencer Trask looked, the less it offered. Spencer Trask is basically buying the Cambrian House platform and its community for a fraction of the $7.75 million that investors have already put into the company. We cannot yet confirm an exact figure, but one source speculates that it could be less than $1 million. Spencer Trask plans on taking the assets and rolling it into VenCorps, a Cambrian House project in development that wants to apply the crowdsourcing concept to venture capital. Sean Wise, a Canadian “venture consultant,” is heading up VenCorps and (presumably) whatever is left of Cambrian House. A Cambrian House spokesperson (VP of Communications Jasmine Antonick) contacted confirms that the sale has gone through and that the site will “dissolve” in three months. We are placing Cambrian House in the deadpool.

So far, 6935 ideas have been created on the Cambrian House site. Some of them must be worth pursuing, no? Perhaps. In addition to VenCorps, Cambrian House itself will be keeping some of its more successful projects alive, including desktop fighter game Gwabs, independent-film funding service FilmRiot, Digg-like charity Greedy or Needy, mobile app testing site Mob4Hire, and virtual gift-wrapping app Prezzle. It will also retain rights to its source code and try to license it to others through an application called Knottle and a platform called Chaordix, both yet to be released. Many of these ideas didn’t gain traction until they were invested in and championed by Cambrian House itself, which again makes you wonder whether any good ideas can actually grow into full-fledged products from an unaffiliated crowd.

To be charitable, maybe Cambrian House just suffered from poor execution and Spencer Trask thinks it can do better. But crowdsourced venture capital? If the crowd cannot even make a decent Web app, the chances of its being able to allocate millions of dollars more efficiently than seasoned pros does not seem terribly great.

The imminent demise of Cambrian House is a cautionary tale for other startups, such as Kluster, CrowdSpirit, CrowdSpring, and FellowForce, trying to cut their teeth in the nascent crowdsourcing industry. They all have their own approach, and experimentation is necessary to find the right one.

The fall of Cambrian House won’t deter them from trying. For instance, Kluster takes a more structured approach by breaking down projects into manageable stages and has thought through the incentives a little differently. And CrowdSPRING, which focuses on designs for Website and marketing materials, is formally launching tomorrow after picking a winner for the $5,000 contest to design its own Website.

Some of these will survive, and some won’t. The key is attracting the right community of active contributors and structuring the rewards in such a way that makes it easy to participate. Or is crowdsourcing simply a bad idea that should be put to rest?

Indeed, our model failed. In short: we became a destination people loved to bookmark more than they loved to actively visit (our traffic pattern was scarily VC-ish). The limiting reagent in the startup equation is not ideas, but amazing founding teams.

A key assumption for us, which proved out NOT true: given a great idea with great community support and great market test data, we would be able to find (crowdsource) a team willing to execute it OR we could execute it ourselves. We needed amazing founding teams for each of the ideas – this is where our model fell short.

What we learned: it would have been better to back great teams with horrible ideas because most of the heavy lifting kept falling back on us, or a few select community members. A vicious cycle was created leading all of us to get more and more diffuse.

Hence: the wisdom of crowds worked well in the model, but it was our participation of crowds aspect which broke down. Trying to find people willing or capable to take on the offspring (our outputs) of the CH model was hard and/or incredibly time consuming.

It is not often you get such an honest assessment of why a business failed from a CEO in the midst of its demise. Sikorsky also disputes that it was a “fire sale,” but declines to give any specifics on the price. He also notes that Cambrian House as a company will continue, even if the site will die, and still owns its intellectual property.

Update 2 (5/20/2008): The company has issued two press releases. One details the sale of assets to Spencer Trask and the other emphasizes that Cambrian House is still a going concern, albeit with a totally different strategy of selling “crowdsourcing in a box” (i.e., licensing its technology to other sites that want to make a go at crowdsourcing). And here’s a 26-minute video Sikorsky made to explain what is happening at Cambrian House titled VenCorps, TechCrunch, and a Loong Talk: 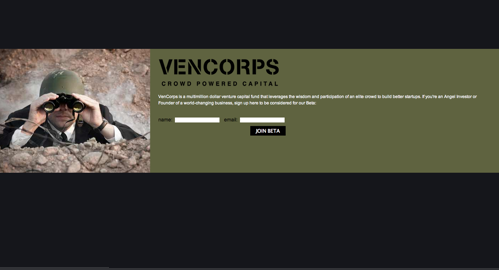