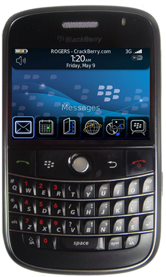 The platform wars are going mobile. Whether it’s the iPhone, Blackberry, Android or Windows Mobile, the mobile platform that will win in the end will be the one with the best and broadest collection of applications. To give developers a little extra financial motivation, funds are being set up to invest in them. Google announced a $10 million Android challenge back in November, and Kleiner Perkins announced its $100 million iFund for iPhone-only startups in March. Now, it looks like Research in Motion is about to announce its own $150 million Blackberry Partners Fund (site not up yet) to spur applications and services for its mobile device.

At least, that is what VentureBeat reports in an item that appeared in its feed, but has since been pulled from the site (see headline here. Update: the first link above is now live). According to that post (excerpt):

Research In Motion, the RBC and Thomson Reuters have invested in an $150 million venture investment fund, called the BlackBerry Partners Fund, to support developers of applications running primarily on the Blackberry.

The announcement will be made in Orlando at a convention on Monday.

The venture firm backing the fund is Canada’s JLA Ventures, a Montreal and Toronto firm active in mobile. That firm will co-manage the investing process, together with the investment group of Canada’s largest bank, RBC Venture Partners. RIM, RBC and Thomson are anchor investors in the fund. Jim Balsillie, Co-CEO, Research In Motion, is on the advisory board of JLA Ventures.

The fund will focus on Blackberry apps, but will also be free to to invest in startups that develop for other mobile platforms as well. That’s smart because no startup should restrict itself to just one device.

But doesn’t it seem like everyone thinks they need to dangle money in front of startups to attract them to their platform these days? (See also the fbFund for Facebook startups and and the MySpace incubator spinoff Slingshot Labs). What ever happened to simply building the best damn platform in the world and letting the app developers come to you because that’s where all the users are?

Update 2: VentureBeat also has a Q&A with one of teh venture partners here.