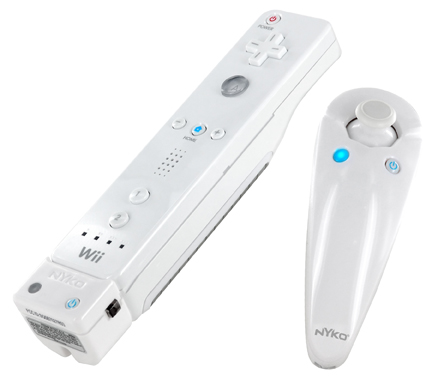 One of the biggest issues I had with the Wii was the Nunchuck. It felt bolted onto the the console and was basically a way to add a few triggers and an analog stick to the Wiimote. Not amazing and, when in the heat of battle, prone to flinging out of your hand and flailing wildly.

Nyko took a look at the Nunchuck, said we can make this better, and has with their $34.99 wireless solution.

The Kama uses an unpowered transmitter and a powered receiver. The transmitter fits on the end of your Wiimote, adding about an inch to its length, and the receiver looks like a Nunchuck without the cable. You drop in two AAA batteries, pair the device by hitting a small, blinking button, and start playing.

The Kama is a little light and, without the cable, feels insubstatial. However, it includes a wrist strap to keep you from dropping the thing and you get a considerably larger range of motion by knowing that you can move your arms in almost any direction and still have it register on the Wii .

If you play Wii, get the Kama. It’s adds a level of freedom not found in the wired version and ensures you won’t start flailing your controller around like a madman with a slip of the wrist. For a little less than a Wiimote, you get a bit more usability.