Meet Watercooler, a startup developing social network applications for all the usual suspects – Facebook, MySpace, Bebo, Hi5, and Friendster – that allow fans to rally around their favorite sports teams and TV shows.

The Mountain View-based firm raised a previously undisclosed $4M in Series A funding from Canaan Partners this past September. While it’s been developing Facebook apps since July 2007, it just recently launched a corporate website to provide a more unified front to its efforts. 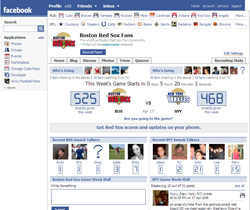 While you may not associate the name “Watercooler” with the more famous app developers Slide and RockYou, as well as SGN and Zynga, the company has created over 700 community-building apps. Watercooler’s installs and active users earns it the #9 spot on Adonomics top Facebook developer list.

Watercooler’s apps focus on particular shows and teams, and give fans an opportunity to discuss recent events, share photos, and take quizzes. The applications can also communicate with each other, allowing for interaction between rival groups, even across the supported social networks. The company’s platform allows the company to produce these applications very quickly, each tailored to a particular show or team.