Austria’s second largest city, Graz, is cracking down on cell phone use during public transport. Commuters are being ordered to 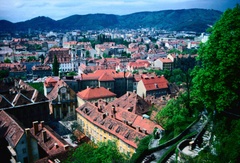 keep their phones on silent mode and can’t talk on the phone while in transit.

“I know I insulted the cell phone goddess a little,” Graz Mayor Siegfried Nagl said.
“But people need to know they don’t have the right to be on the telephone permanently and constantly,” he told Austrian television. “It’s just not healthy to never be able to get any peace and quiet.”

There has been a backlash against public cell phone use around the world. France’s national railway has recently created phone-free “Zen Zones” on high-speed trains. U.S. Rep. Peter DeFazio has filed legislation that ensures Americans won’t be subjected to cell phone talk while on airlines. New Jersey fines people $100 for talking or texting while driving. At least 21 states in the U.S. are considering legislation to ban texting while driving.

Banning cell phone use in public doesn’t always work. Last May, Sweden’s Stockholm Transport did away with cell phone free zones on subways, buses and commuter trains just 10 months after launching the spaces.

“It relied on people showing respect, but it didn’t really work,” spokesman Bjorn Holmberg said: Too many passengers wanted to use their commute to catch up on work calls, and some just felt safer with cell phones in hand.

The Graz ban is voluntary and there won’t be any tickets handed out to people who breach the ban. A recent poll in Austria