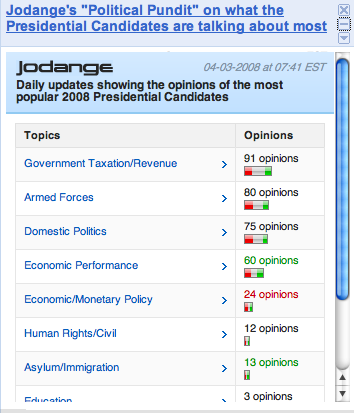 As campaign season heats up, creating a political widget is a good way for startups to highlight their technology. Today, Jodange released two more Top of Mind widgets for iGoogle that tracks the sentiment about the political candidates as well as the sentiment of the candidates themselves on a series of topics. The first one, Candidate Pundit, analyzes news stories, political blogs, and other sources and does a semantic analysis of the text to determine whether the story is positive, neutral, or negative about a particular candidate. (The company’s first Top of Mind widget tracks sentiment on publicly traded stocks).

The second one, Topic Pundit, tracks the candidates own sentiments about issues such as taxes, the armed forces, domestic politics, and immigration. You can click through to see how the sentiments break down by candidate, and then click through again to see the excerpt that was analyzed. To see the actual source (mostly newspapers, it seems), you have to click through all the way back to Jodange’s site. It would be nice to see the source in the widget itself, but otherwise it is a very promising app because it helps you cut through the clutter of political reporting and speeches out there.