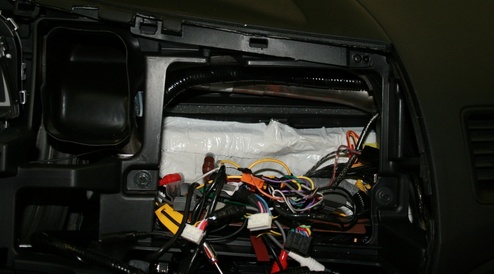 I drive a Kia Spectra that I just love. I bought it brand new 2004 and one of the first things I did was have an iPod adapter kit installed for the car stereo. I’m an iPod guy, and I want to take my songs with me always. I took it to Circuit City and while the install was fast, they messed up the facing on my dashboard, so now it just sort of hangs there. They told me there was nothing they could do about it, and that I should talk to their insurers, who cover the repairs but have a $500 deductible. The damage estimate was $350. Sucks to be me.

But not as much as it sucks to be VTECnical, a poster on Consumerist, who’s 2007 Honda Civic was destroyed by the install techs at Circuit City, leaving it “unsafe to drive” in Honda’s opinion, rendering it uninsurable and thereby undrivable.

Circuit’s only willing to refund $3,190 to VTECnical, despite the total bill to fix it coming to $12,119. For everything else, he has to turn to the same insurers I did, and we know how well that went for me.

Here’s hoping he has better luck.