There is nothing worse than waiting for a mobile browser to fire up on your mobile phone (especially if it’s AT&T). That is why mobile apps customized for your phone still tend to deliver a better experience than going through the browser. Anyone building mobile apps knows this. Cut out any unnecessary steps and lag time, and the usage of your mobile app will go up. The folks on the Google Mobile team live by this rule and have been working hard to make their mobile apps faster (for search, Gmail, Maps). (More at MobileCrunch)

Below is a chart from Google showing how usage of Gmail on the iPhone took off once latency issues were resolved. 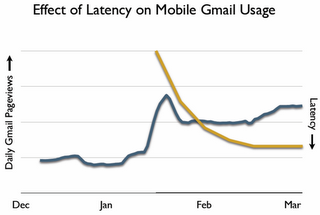 What is true for the Web is doubly true for a mobile phone. Slow me down, and I’ll bail on your app. Building custom apps lets developers tweak their performance to each device. The downside is that consumers have to open up a new app for anything they want to do on their phone. There are only so many apps most people are able to juggle between (even on a full-sized computer, I use no more than five or six applications on a daily basis). What we need is a general-purpose app to access the Web from mobile devices that is also fast. What we need is a better mobile browser. Or faster mobile networks. Or both.

As fast as the mobile version of Gmail is, it is still not fast enough. I have it on my Blackberry. Google nailed the mobile interface, the search, and the address auto-completion. It is a much nicer interface and more fully-featured than my Blackberry mail. But I hardly ever use it because my Blackberry mail is much faster. The native Blackberry feature already fetches all of my Gmail messages for me and I don’t have to launch it as a separate application. It is just always on, always updated.

That is how all mobile apps should work. Of course, Blackberry has the advantage of being able to build its device around this particular app. If you are going to have to launch an app to access the Web, you should have to do it only once.