Facebook held a fairly large press event today around privacy and other new products at 10am PT at their Palo Alto headquarters. There were a number of announcements made, although live blogging of the event was not permitted. These are my raw notes from the event, which I am posting immediately afterwards. A wrapup post will be posted shortly. We’ll also update this post with pictures.

Summary: new and simplified privacy controls taking advantage of friend lists (to be released later tonight), and confirmation of Facebook Chat (that’s the official name; to be released in the coming weeks). 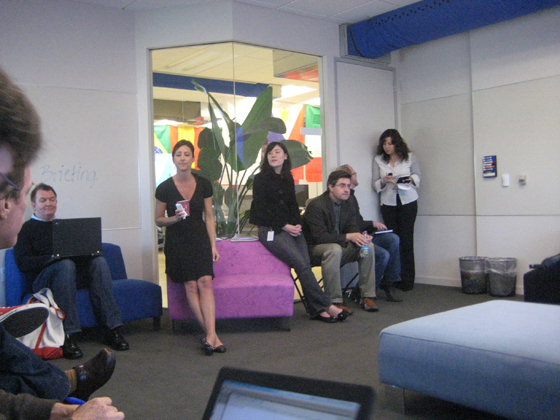 Facebook wants to satisfy the desire for better more personal communication among people who know each other. Facebook also wants to give users better control over their information: what they share, when they share, and who they share it with. It’s reeally important to give people the right tools to keep them in control.

Originally Facebook was only for American college students so product principles were fairly easy to follow; just had to work within a college network. But today, four years later, many more types of users, types of relationships, etc.

When first launched, it seemed to be pushing the envelope to ask users to put cell phones up on their profile, even more surprised that people actually were doing it. Nowadays, few people think twice about it. 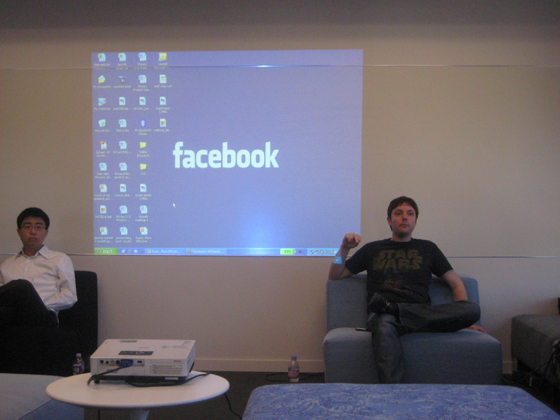 Two changes launching tonight, or by tomorrow morning, related to improvements in the privacy interface. Users can now set privacy setting related to friend lists, which were announced a couple of months ago. 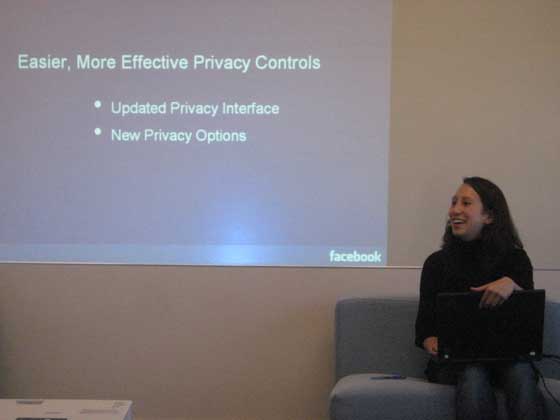 Also a simpler interface that makes it easier to find what you are looking for. 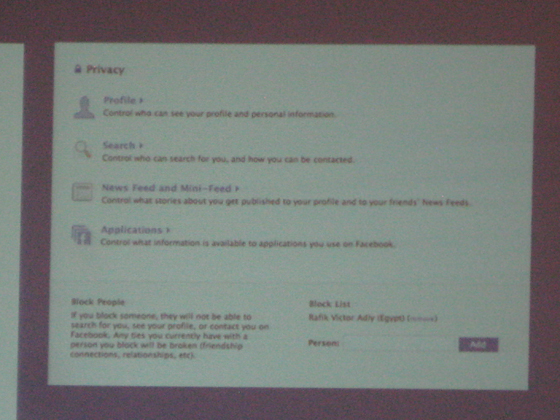 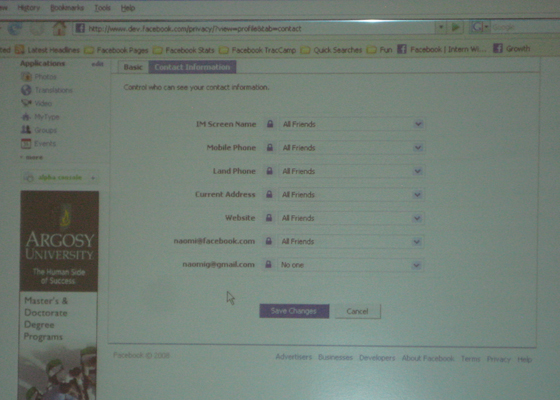 New friends of friends privacy options. Can also share information with people you are connected to. Much more detailed options.

Users can create private groups of their friends. Naomi created a co-worker friend list. Easy to send messages to co-worker lists, send status messages just to co workers, etc. But the main announcement today is the integration of friend lists with privacy. You can share information with all friends, some groups, or all friends except some groups. Pretty much all data you add to Facebook can be specified as intended for certain people (photo albums, contact info, etc.) and not for others 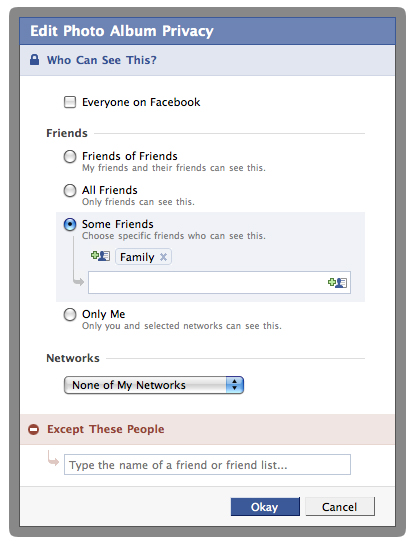 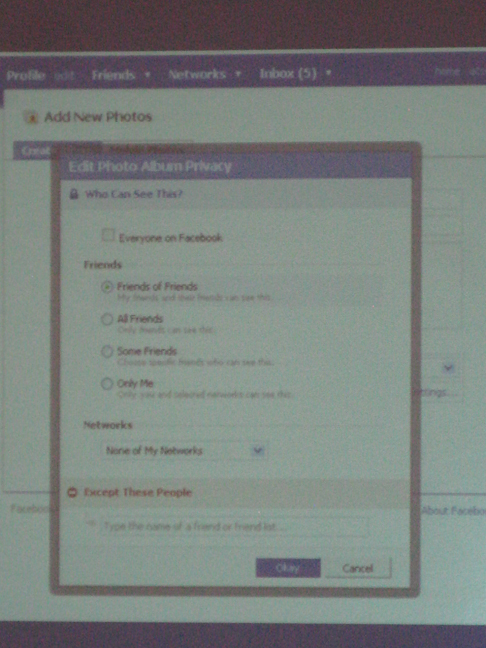 Friends can be in as many groups as you like. 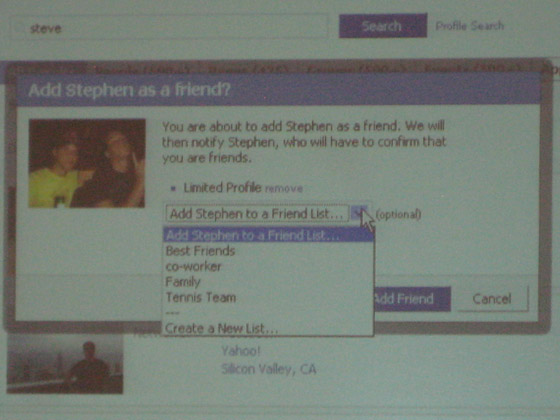 Your friend lists are private; only you can see which of your friends go into each one.

This is not replacing social map details, where you say how you know someone when you add a friend. Those will still remain on the site.

The new privacy interface and options apply to third party profile boxes as well, so you can choose to show certain apps only to some friends 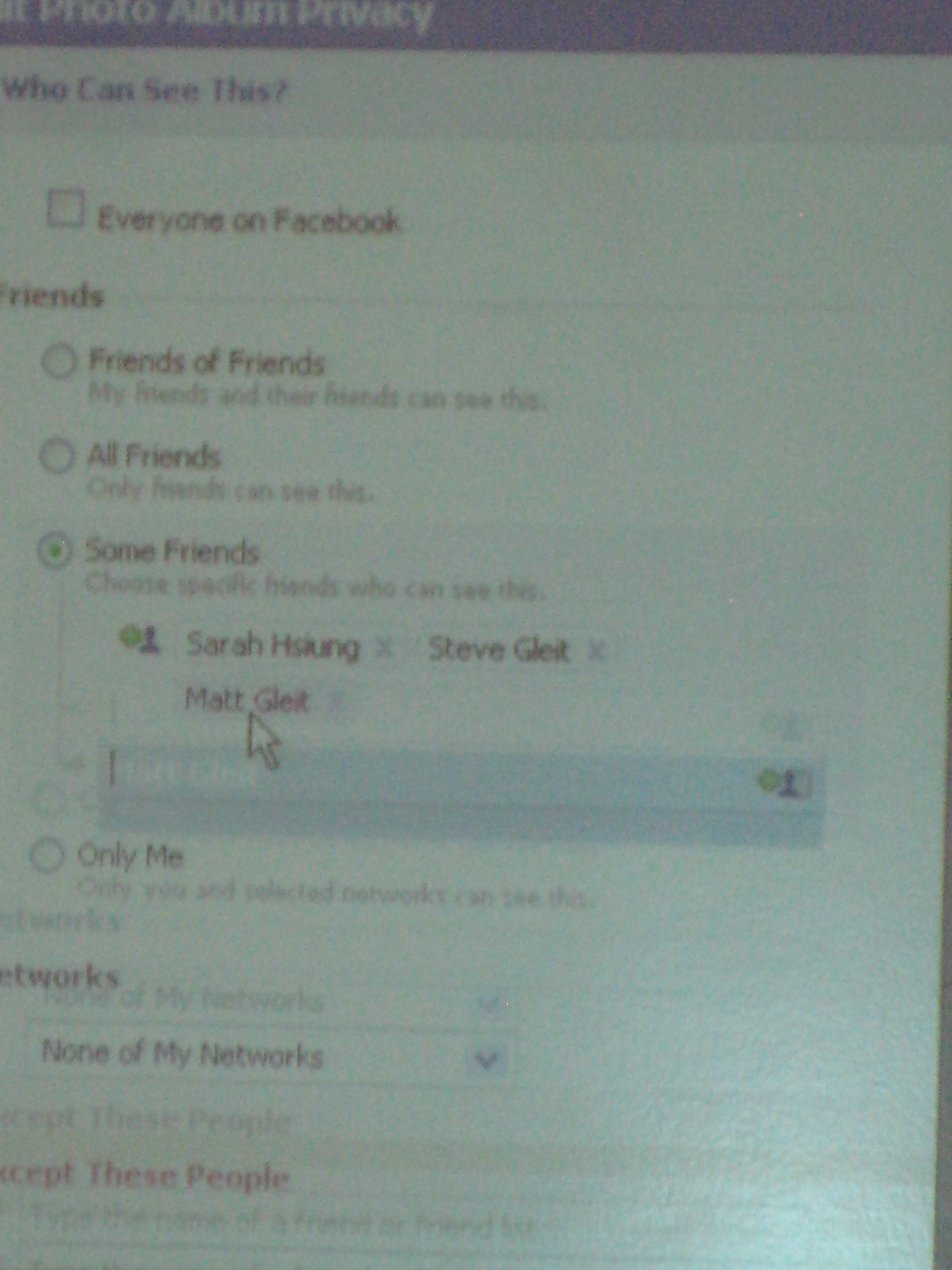 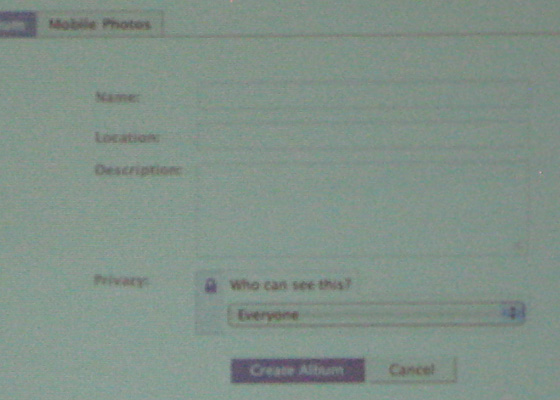 They are giving us a preview, it’s launching in the coming weeks. It will open up a new channel of communication to allow users to chat. Chat UI on the bottom of the browser, exists as a permanent bar wherever you go on the site. There’s a friends button in this bar on the right; you can click on a friend’s name and start chatting with them in the browser.

Chat conversations can be minimized or popped out of the interface into a separate window. Eventually you will be able to chat by friends list. Chat works on all browsers.

This is not Jabber, but they are considering Jabber integration. May or may not integrate. If they can support it later, they will. No API support for Facebook Chat right now (ie platform developers can’t build anything with it). 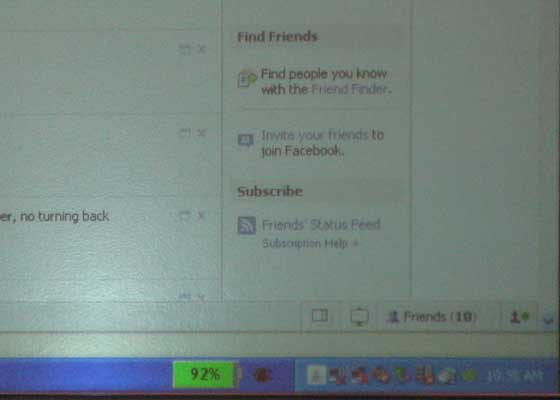 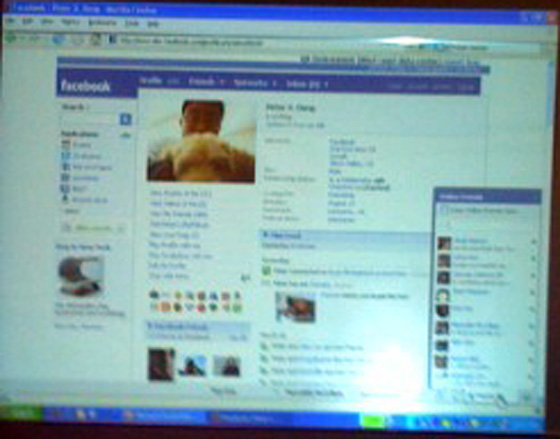 Just one-to-one chat now (you can’t talk with multiple people in the same window). Chats are archived and history can be cleared. There’s no “away” status — just online or offline. You can set it to offline even when you’re browsing Facebook, so that no one can message you. If someone tries to message you when offline, it’ll prompt them to send you a regular Facebook message.

Question to Matt Cohler about Beacon issues in the past. “We just screwed it up” he says. But he is also thinks it’s now an excellent product, despite rushing it out the door initially.

Took questions but did not present. Spoke for awhile on the use of user images and names in promoting products, says that the opt out option is fine legally for users, and that they give permission to use their likeness and name simply by using facebook.