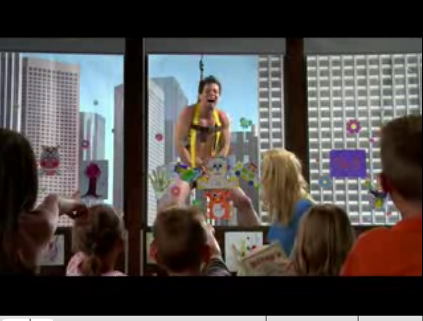 Sometimes you’ve got to wonder what goes through the minds of TV executives. Today, the Disney-ABC Television Group decided to launch its Web video studio, Stage 9 Digital Media, with the debut of “Squeegees” on both YouTube and ABC.com.

Lame doesn’t begin to describe this three-and-half-minute comedy about the hijinks of a window-washing crew. The acting is horrible and the jokes fall flat—drunk, naked window washer (don’t ask) scares kids in a day care class as he dangles outside their window. It is something that ABC, one hopes, would never put on television. So why subject Web audiences to something like this? In another clueless move, ABC has turned off the embedding feature in the YouTube player. I guess it doesn’t want people spreading the show around.

I wouldn’t be so harsh on ABC, except that in the press release announcing the launch of Stage 9 and “Squeegees” there is this quote from Barry Jossen, the “Acadamy Award-winning short-form producer” who is now the general manager of Stage 9:

While the new media space is loaded with UGC, we feel the audience is missing the quality experience found in other forms of exhibition, and we are answering their need. This creative frontier gives us the opportunity to develop new franchises, discover and develop talent and, most importantly, expand the standard of excellence set by our parent company in creating superior episodic programming with great stories and production values.

Superior episodic programming? Please. ABC/Stage 9 has 20 more Web shows in the works, and maybe it will get it right with one of them. But with “Squeegees” it is not putting its best foot forward, and it is certainly not expanding the “standard of excellence.” I’ll take original Web shows like Rocketboom, WallStrip, or Pop17 any day over something half-produced. What ABC fails to understand is that when it comes to Web video, authenticity trumps production values.

There is nothing wrong with going the “quality experience” route, but you can’t go half way. Because it is ABC, people will expect more from any show associated with Stage 9 than from someone filming in their house. If it is going to try to teach the Web how video is really made, then it should have picked a different opening act.