So the rest of us can’t quite cry along with Robert Scoble – not just yet – but the attendees of TED had the opportunity to do so today when Microsoft presented the stargazing software we wrote about last week called WorldWide Telescope.

Microsoft has launched a website for the service that says “coming in spring 2008” and provides a FAQ sheet along with a couple video montages of people reacting to the product. These videos don’t show the product in any substantial way but rather serve to further the hype (apparently it wows not only tech bloggers, but children, well-renowned professors, and other experts as well).

Few people have seen the product yet, but based on the testimonials on the website, it better be significantly better than the existing Google Sky, which launched last August as part of Google Earth, and the open source Stellarium (which is hugely better than Google Sky already).

Below is the only screenshot of the product that has been published so far. From what we can gather from the website, WWT is built on top of Microsoft’s Visual Experience Engine. It will also sport these features:

– WorldWide Telescope is an observatory on your desktop, allowing you to see the sky in a way you have never seen before; individual exploration, multi-wavelength views, stars and planets within context to each other, zoom in/out, and a capability for anyone to create and share a tour of the universe.
– The Visual Experience Engine delivers seamless panning zooming around the night sky.
– WWT delivers seamless integration of science:-relevant information including multi-wavelength, multiple telescope distributed image and data sets, and one-click contextual access to distributed Web information and data sources.

The product is based on Jim Gray’s SkyServer and is therefore considered an extension of his work. 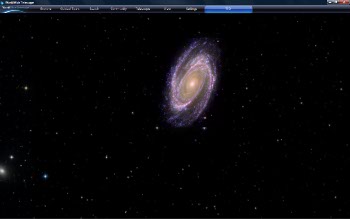