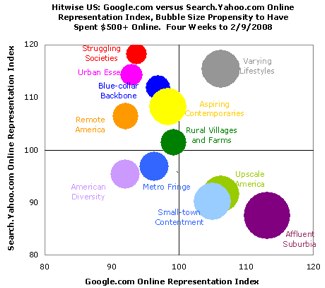 The graph right demonstrates “Online Representation” based on demographic types. The Y axis represents Yahoo, the X axis Google, with the higher the number, the more that particular group of users uses each service. Yahoo is strong in “struggling societies,” “blue collar backbone,” and “remote America,” where as Google obtains higher use in “small town contentment,” “affluent suburbia,” and “upscale America.” The size of each circle represents how many in each group have spent $500+ online.

The differences between the groups aren’t great, but the results do go some way in explaining the Yahoo conundrum. Although a distance second in search, Yahoo has remained the number one traffic destination online ahead of Google, so you’d think with more traffic Yahoo would convert that traffic into similar returns to Google. But alas we know that not to be the case, and that would appear in part to be related to people using Yahoo not spending as much online and being in poorer demographic categories than Google users, providing a lower return per user.

Update: unlike some of the class warriors in our comments, just to reiterate: these figures are not exclusive, ie: lower demographics use Google as well and higher demographics use Yahoo, it simply points out that according to Hitwise there is a weight either way among users of both services. That is an interesting split, both when considering yields per user on each site, and in a broader sense which services appeal to these different groups. There’s nothing discriminatory is pointing out data from a third party, and those suggesting this is some sort of class based conspiracy from TC say more about themselves than this post. All data is good if it helps us understand markets and in this case the user base on two of the largest internet companies there is.