I am convinced that we are going to see a big growth in voice apps that use a mobile phone as a microphone. Today, at the Mobile World Congress in Spain, London-based startup SpinVox announced a new feature of its speech-to-text service that lets users call in their Twitters or send in messages to Facebook or Jaiku.

Is making a phone call easier than thumbing an SMS? Depends what kind of phone you have and what kind of person you are. But the Dictaphone is now social. This will appeal at least to all those people who like to record their notes into a mini tape recorder. They can share those thoughts with the world, and computers will transcribe them.

As far as I can see from a quick perusal of SpinVox’s Website, its service is only available in Europe, and it is not free. But it is an obvious solution to the mobile user-interface problem. The best input technology for a mobile phone is speaking into it. Maybe competitors SimulScribe, Jott, or Yap will step up to the plate in the U.S.

Wait, there is already a way to turn a phone into a microphone for any Web application. It is called the MyVox API from VoodoVox. It is ad-supported so it is free. And the best app built on the API can win $25,000.

Hat tip to our man in Spain, Crunchgear’s John Biggs, who alerted me to the SpinVox announcement, and discovered these weird blockhead dolls at its booth at MWS: 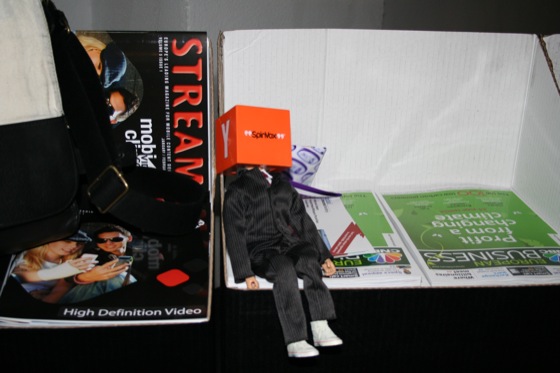