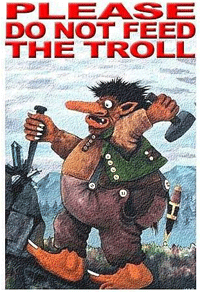 A California court has found that trolls are protected by the first amendment and are entitled to anonymity. The ruling comes despite previous cases where trolls have been arrested (be it once they have been disclosed) and hearings in other courts.

The court reversed a previous decision that would have allowed Lisa Krinsky, COO of a Florida based drug service SFBC, to subpoena 10 anonymous Yahoo message board trolls, according to Ars Technica.

The 10 trolls posted on Yahoo message boards in 2005 with “scathing verbal attacks” including referring to the management team of SFBC as “a management consisting of boobs, losers and crooks,” and responding to Krinsky with comments such as “I will reciprocate felatoin with Lisa even though she has fat thighs, a fake medical degree, ‘queefs’ and has poor feminine hygiene.”

The court found that although the Internet is still bound by rules about libel, what was posted were not assertions of “actual fact” and not actionable under defamation law, therefore protected under the First Amendment, in sort of the same way parody is.